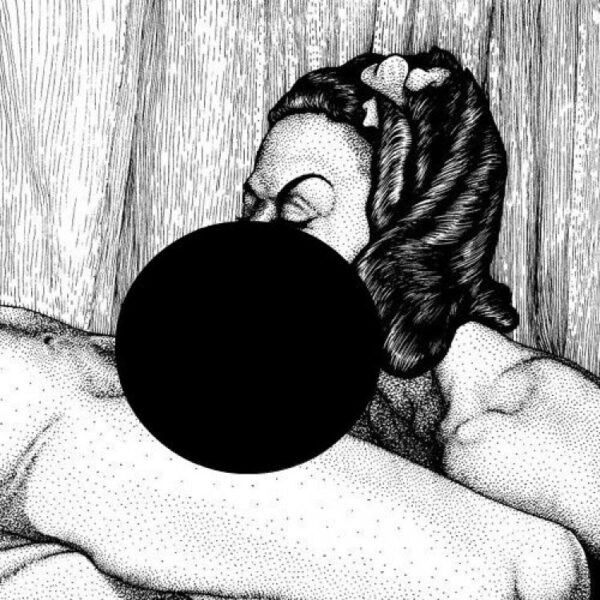 We have the latest LP by micro_penis, that outre French group who occupy their own particular niche of the bizarre in this increasingly mad world…titled La Maison De La Justice (ÉDITIONS VIBRISSE IISS06), it’s dated 2018 on the back cover but may have been released in late 2019, and we got a copy in July 2020. The team of Heyer, Kittel, Ogrob and Spenlehauer create another fascinating dish of ugly musical-noise spew, and I think the last time we heard from them collectively was on the Schlim LP from 2016 with Anne Zimmermann’s slug-covered face on the cover, although in terms of side projects there was the rather creepy Arnold & Monica tape from 2019, and the ultra-weird Schleemm CD from 2018. Today’s record sees the micro_gang creating another “themed” record (something they haven’t really attempted since the masterful Tolvek record of 2011), and La Maison De La Justice might be telling some fractured, surreal story about the French legal system as refracted through their collective lunatic sensibility. Well, that’s giving them the benefit of the doubt, when faced with such prolix titles as ‘La Fonctionnaire En Charge De L’Accueil Juridique’ and ‘Freedom (Liberté Entravée)’, neither of which do anything to advance the cause of the judiciary with their absurdist bleatings. If there is a theme, its centrepiece might be the long track which opens Side B, ‘Le Procès De Eddie Quist’ 1, which may or may not depict a trial by jury going horribly wrong, and whose painful details are not spared the listener.

Most of this record exhibits the traits by which we know and love micro_penis (and other related Sebastian Ogrob records); they delight in creating noises which are terribly rude and offensive, instantly reminding the listener of the more unpleasant aspects of the human anatomy. Indigestion, farting and belching are imitated by horns and electronic noise; and when the band are playing at full strength, they sound like a four-way sex orgy full of sweating, grunting, and frenzied pumping. It might just be the salacious record cover artwork (drawn by Guillaume Soulatges) having this effect through the power of suggestion, but I think it’s fair to say that an obscene sexual subtext is never far away on a micro_penis record. Emotionally, the record traverses every extreme of the troubled mind, from a sense of utter futility through to outright resigned despair, taking in a few hysterical outbursts and madcap capers for good measure. It’s music as if made by four schizophrenics…each of them cultivating and nursing their multiple personality disorders. Naming the opening track ‘Dementia Praecox’ lets you know exactly where you stand with these dangerous loons. They seem to delight in everything about the human body and humankind, while simultaneously feeling a deep revulsion towards it; in the same way, they take everything deadly seriously, yet reserve the right to make a mockery of all we hold dear. In this instance, having a dig at the law courts – or at any rate, a vanished 19th-century version of them, replete with ridiculous judges in wigs and robes – is but one speedy route to undermining any shared sense of normality.

The band also stand charged of making a mockery of all that’s decent about music with these formless, self-indulgent parps, Some tracks are outright spoofs of rock music and pop-reggae, but for the most part what they play is their deliberately shocking and confrontational brand of free improvised noise. I have often supposed this tactic to be a deliberate cruel stab at “proper” improvisation, but this time around I’m less sure. If they are a band that hates the possibility of free music, they sure have evolved a very good rapport after these many years, and play together with an instinctive collective bond that would be the envy of many other players who call themselves professional improvisers. They anticipate each other’s moves, and every element hangs together – despite their attempts to manufacture everything that’s ill-fitting and awkward. It’s also true that micro_penis now have a totally unique sound all their own, outrageous and unhinged as it may be, which is probably one of the things that I find palatable about them. In a musical world where so many people apparently want to blend into an innocuous background of ambient wallpaper, here are four individuals intent on standing out in the crowd at all costs. If any of these observations are half-right, this could be one of their best records yet. From 20th July 2020.

Available in the UK from Cold Spring Records; redacted cover image from their website.