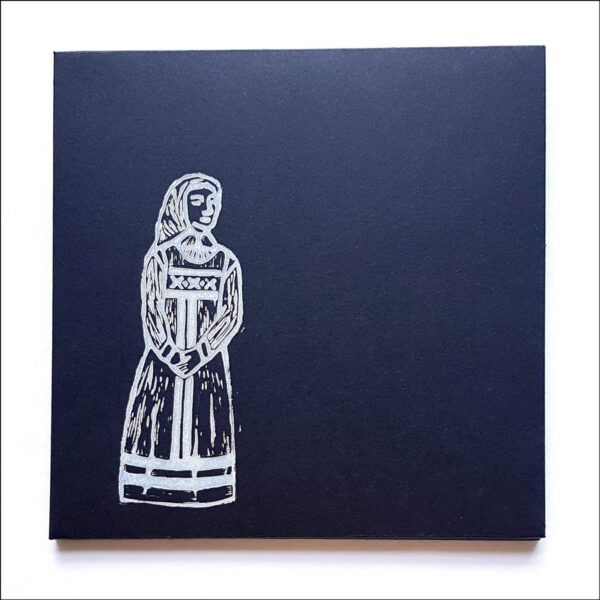 Got a couple of new vinyl releases from the English label Horn Of Plenty. This imprint brought us the Mudguards LP in 2018, an extraordinary compilation of radical underground English punk music from the 1980s, something that was a real personal labour of love for those running this label. We’re getting the same hand-made vibe from today’s two items, both of which contain distinctive music and sounds, and certainly go that extra mile in the packaging department. 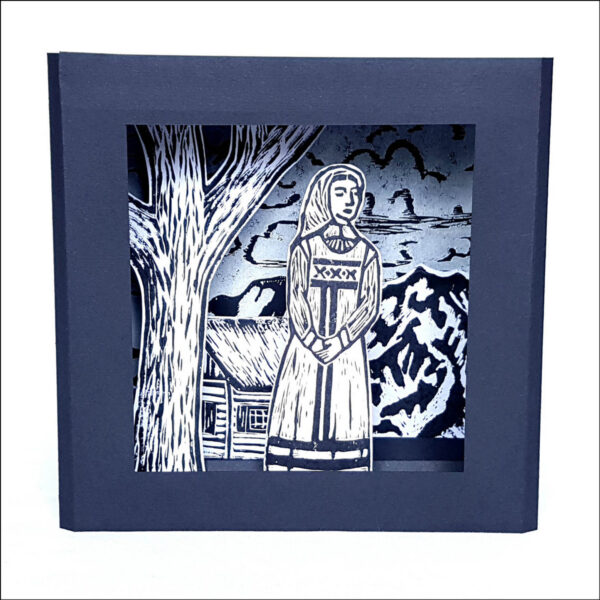 The 45rpm single is credited to Little Skull, though it’s interesting that name isn’t printed anywhere on the release, and instead there’s a drawing of a white skull printed on the A side. This is a solo turn from New Zealander Dean Brown, whose music I never heard, but I see he was a member of the NZ trio Little Eh who produced a number of lathe cuts in the 1990s (many cut by Peter King); the trio appear to have morphed into Nova Scotia, and through the 2000s scored a little more recognition with records for PseudoArcana and Metonymic, among others.

The two sides here are titled ‘How we used to laugh’ and ‘Haunted and defiant’ (HORN OF PLENTY hop2), both titles hinting at rather wistful and introverted themes, entirely in keeping with the fragile music hereon. With just a few layered elements, Little Skull conjures up a mysterious mood, and strange windows open up revealing ambiguous scenes, in fleeting glimpses. There may be voice samples, guitar, violin, drone; each musical element is modest and understated, and carefully separated out in the lean production. This may sound like I’m describing the whimpers of an under-achieving loner, but Little Skull is far from that; rather, I’d prefer to think of him as custodian of a private world, or secret treasure. There’s a terse sleeve note reminding us of Dean Brown’s New Zealand underground musical roots, but also adds a shopping list of cultural references embedded in his work, most of which are beyond me, but allude to the extremes of free improvisation, library LPs, specific soundtrack LPs, and an obscure Dutch cellist who specialised in playing on period instruments.

Musically, two flawless miniaturist gems await your ears. The other artistic achievement is the cover, handmade by Little Skull, described here as “intricate”. That’s an understatement; a handcut diorama, printed in varying shades of black and white, has been assembled in a box with flaps, to house the seven-inch record. The concertina folds necessary to hold the diorama have resulted in a thick and heavy artefact, presenting something of a Chinese puzzle to the user eager to find the vinyl within. The production chain for these seems to have involved a circuitous journey to London and back, by way of Italy, for reasons I don’t quite understand. But the finished artefact is quite a prize, and the image shows an anonymous woman (a rural peasant from some timeless Eastern European country) fully at home in the landscape, somehow integrated with tree, mountainside, and sky. Only 100 copies were produced. 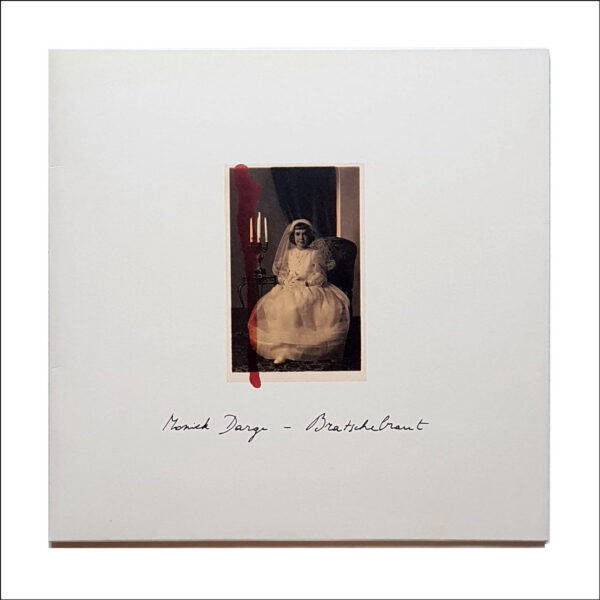 The second record is a full length LP, pressed in red vinyl with a red inner sleeve, and a booklet of texts and photos provided by the artist. Moniek Darge of Bruges is much more than just a musician, and her work encompasses semi-musical performances often using invented instruments, field recordings (she calls them “soundies”), performance art, installation art, and probably more besides; plus she teaches art history at the Hogeschool in Ghent. We have encountered her work before mainly through the good graces of Graham Lambkin’s Kye label, who compiled and/or reissued a number of her 1980s recordings, for instance on Sounds Of Sacred Places and Soundies; he even collaborated with her for the Indian Soundies record in 2014. Plus she was one half of Logos Duo in the 1980s with Godfried-Willem Raes; their 1983 Composition-Improvisation LP released by Igloo is a highly unusual example of stand-alone improvised music which doesn’t fit neatly into a continuum of this genre, partially because of the home-made instruments used in its production (reminding us in places of Anima, another odd couple of experimenters who played the horns and strange instruments built by Paul Fuchs).

Today’s record Bratschebraut (HORN OF PLENTY hop3) features four performed works by Darge from the 1980s, from around the same time as Sounds Of Sacred Places, and may be otherwise unpublished; the press notes allude to “a deep excavation of the Logos archives”. In terms of the presentation, Bratschebraut is unmistakably an artistic statement by Moniek Darge, every part of the package presenting her ideas, images and texts, entirely on her own terms; I’d like to think she did the hand-lettering on the front and back cover, but this might be the work of designer and layout artist Karolina Kolodziej. The four performances were realised using Darge’s voice, violin playing, prepared tapes, clarinet, plastic flute, and other devices; but in each case, there’s a lot more back-story and depth to be explored. On 1986’s ‘Clouds’, for instance, we have a prime example of her unorthodox violin playing skills; it’s to do with moving the arch and pressing on it, probably in ways that would send a classical concert player into a swoon of horror. She combines this playing, which evokes the sound of the wind, with tape recordings of the Pneumaphones built by Raes; these unique objects, part sculpture and part instrument, are effectively large inflatable cushions hooked up to resonating devices, exploiting the possibilities of variable air pressure for the production of sound art. 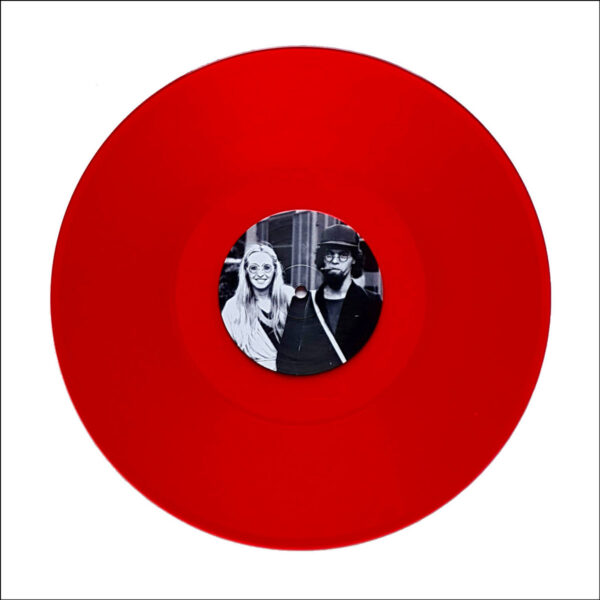 On ‘Dark Waves’, we’re only hearing one half of the story with this vivid 1981 recording of Darge with violin, voice, and synth; it was originally performed in a darkened venue with a minimal light show, projecting small dots of light on the walls. Darge has her own personal travel odysseys (many of them) to reflect on as she performs this piece in celebration of escape and personal freedom; the light show was intended to invite the audience to join her on her flight. As I read this, I see photos from the year before (1980) for when Moniek Darge showed up at London Musician’s Collective wearing her black suit, her long arms looking like lethal weapons, and playing the amplified violin with a vibrator. The 1984 piece ‘Bratschebraut’ is even more personal, likening her musical career to a betrothal and explaining it in the context of her family life, her upbringing, her Catholicism, and her yearning to play the harp (ultimately a wish that was denied, as the instrument was too expensive). Subtitled “The Bride of the Alto Violin”, this ‘Bratschebraut’ has to be performed by Darge wearing a white dress and sitting on the floor; the veil and red rose connect directly to her communion dress, and that’s her (photographed in 1959) on the front cover.

The B side of the record is taken up with the long work ‘ManMo2’, quite a late work from 1988-1989, and an unusual example of a graphical score; it makes extensive use of field recordings along with the pre-recorded tapes and instruments played by Logos Duo, and in its complete version includes a light show as well. The field recordings combine sounds from Belgium and the Australian bush; when they performed it in Western Australia, a critic was moved to write that it was “a most successful evocation of primordial night”.

I hope these sketchy notes of mine indicate something of the singularity of Moniek Darge, the strength of her ideas, and her fully-integrated artistic practice, where sound, nature, movement, performance, visuals, and personal history are all successfully joined in a holistic creative vision.