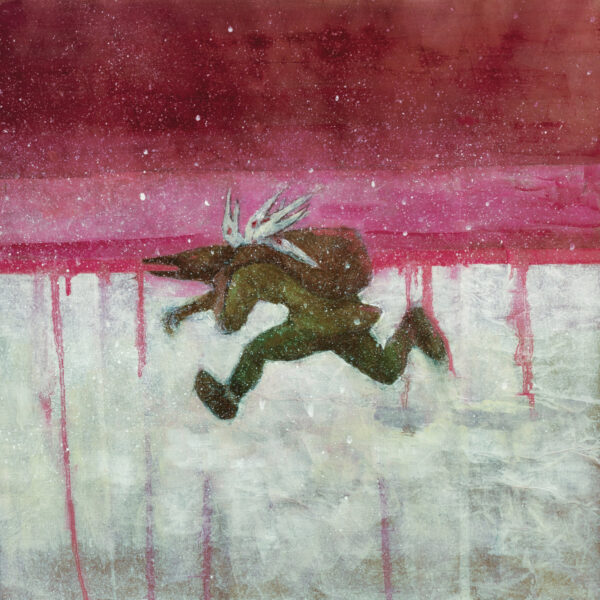 Got a nice package from Gosha Hniu containing two releases of the band Staraya Derevnya, one on CD and one on cassette…these arrived in August at a time when they were also planning a third release for September. Staraya Derevnya are based on London and Tel Aviv and are one of those performing collectives who seem to have a fairly fluid membership, and a healthy interest in collaborations, as will be seen with the cassette item. They call themselves a “psychedelic / kraut-folk collective”, which is a handy way of indicating some of their far-reaching musical tastes. Grundik Kasyansky, whom we heard on his Lepus cassette for Linear Obsessional, is a member of this band; Grundik’s connection to the Tel Aviv experimental art-music culture extends back to the 1990s, and for all I know the same may apply to other members of Staraya Derevnya.

The astonishing album Inwards Opened The Floor (NO LABEL) was mostly recorded in 2017 in the Cafe Oto project space in London (although it’s not a live album), with additional musical parts added in 2017-2019. It’s fascinating and compelling music here, often quite bizarre and freaky in places, yet always remaining totally accessible throughout. The massed band play a number of acoustic and electronic instruments, including non-musical objects and toys, and they opt for a very “polyphonic” mode – lots of things going on all the time, many layers of musical activity to sift, with the whole thing driven forward by trancey, hocketing rhythms. These rhythms, somewhat Middle Eastern in nature, are one of the band’s real strengths here, and I suspect it’s not all down to the rhythm section – even though there is a double bass player and a drummer at work. The band seem to move together as one, crawling and then leaping like a lurching animal, with each musical event getting slightly more crazed as it progresses forward on stamping paws.

Speaking of crazed…a lot of the madcap elements (which I totally love) may be due to Gosha Hniu and his “cries and whispers”, a credit which is a modest way of describing his powerful vocal eruptions. Like an update on Damo Suzuki, he’s less concerned with forming audible lyric passages than with creating a strong, emotional effect with his unusual vocalisations, and blending into the collective musical effort. However, we shouldn’t overlook the lyrical content – derived from the poems of Arthur Molev, the contemporary artist from St Petersburg. (The lyrics are available – in Russian – on the Bandcamp page). Then there’s the track titles – I know I keep finding surrealism and absurdity wherever I look, but who can resist track titles like ‘Hogweed is done with Buckwheat’, ‘Burning Bush and Apple Saucer’, and other such zanoid utterances? Lastly we must mention the package for this one. The cover of the CD case had been hand-perforated to create a kind of “smashed-window” effect, allowing us a glimpse of an eerie bird-headed figure running across the ice with a sack of birds on his back…Danil Gertman did this excellent painting for this limited edition CD, and there’s also a cassette version through Raash Records. If in search of something genuinely original, creative and highly productive, you need look no further; I’m very happy to have discovered the music of Staraya Derevnya, and hope you will be too. 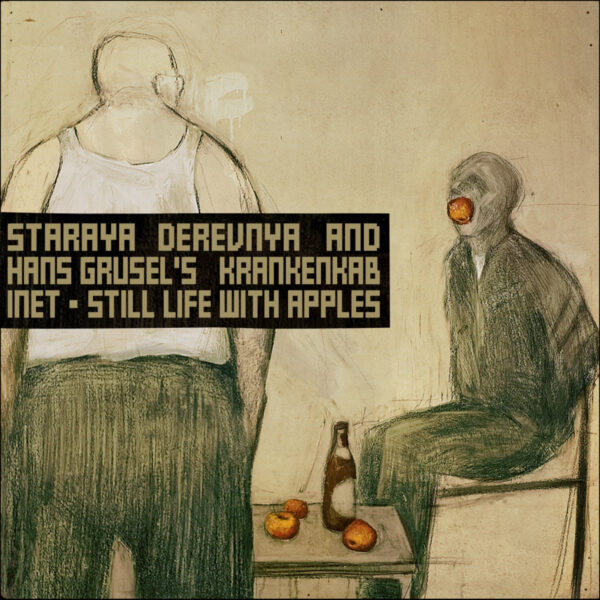 The cassette item sees Staraya Derevnya teaming up with Hans Grusel’s Krankenkabinet on Still Life With Apples (STEEP GLOSS SG16). I’m personally delighted to hear from the Krankenkabinet again, not having received a record from them since 2008 (Blaue Blooded Türen on Resipiscent); they used to be a solo turn for Hans Grusel, though I think they’re a duo now, and while I fell for the ruse about them being ex-pat Germans, it’s now clear they’re Californian. They also seem to have updated their approach to move away from crazy noise, in favour of a more benign electronic burblery and antic malarkey.

Appearing from Staraya Dereyna on this tape are Amos Ungar, Gosha Hniu, Grundik Kasyansky, Maya Pik and Ran Nahmias; and there’s also the redoubtable Liz Allbee, lending her trumpet and electronic effects to the fun-filled sprees and spews of sound. Two concerts from 2017, one at Tusk Festival and another at Cafe Oto. Similar to the above release, we have a very dense and teeming array of music and voices to digest, with the general mood often teetering on the brink of insanity. The Krankenkabinet team are in good company, given as how one possible translation of their name from German is “insane asylum”. Part 1 (Tusk) starts out lively and demented, but then sags a bit as it traverses into a downcast and melancholic mode; still, even as it meanders in a self-made twilight zone, the eye of their muse is not fully closed, and there are plenty of choice sonic nuggets to hew with one’s pickaxe. On Part 2 (Oto), the aim appears to be to engender a slowly-creeping form of menace in the shape of a Golem or ogre growing in stature, unsure about what his mission in life will be, but you can bet it won’t end well for most of humankind. The sinister obsessive riffing at the end, almost like a spastic form of guitar rock music, is particularly unsettling as it blends with the constricted vocal squeals. This has been a very good team-up documented here, although it’s just possible the band may have sacrificed some of their exciting forward-propulsion dynamic that is much more in evidence on Inwards Opened The Floor, in favour of a more generalised soup of spicy audio gloop that mutates, fizzes, and crawls like fleshy blobs from a test-tube.

Both the above arrived 12 August 2020. It seems Staraya Derevnya is also the name of a metro station in St Petersburg, and is even rendered in Cyrillic letters on one of their earlier releases, From Inside The Log, where a number of Russian musicians join the fray. Coincidence? Hardly…