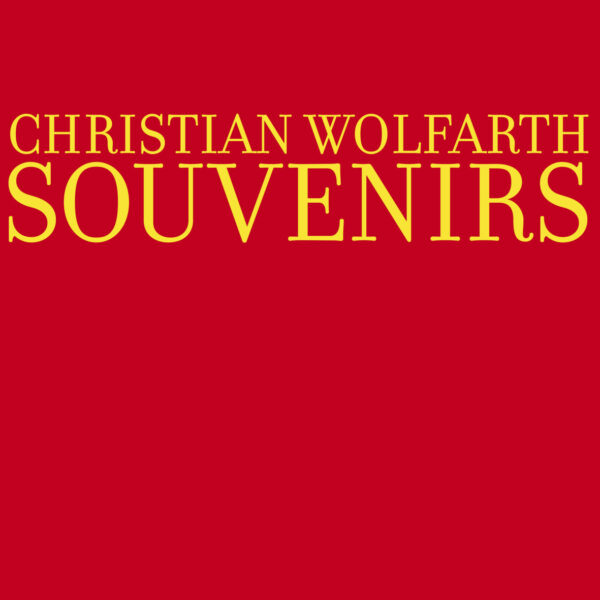 Another solo percussion LP from Christian Wolfarth, following on from his 2016 offering Spuren. For that item, he worked hard to explore timbres and textures of the drum kit, doing it over two extended performances, one per side. That template continues on Souvenirs (HIDDENBELL RECORDS 012), another solo set intended to showcase his very focussed approach to playing. This time, he has restricted himself even further, not necessarily in the pursuit of an ideal about minimalist purity, but rather stemming from a concern about overtones and interferences – about which more shortly.

On the A side, he plays just one drum, and on the B side, he plays just one cymbal. Further, it seems that these are both non-standard pieces of kit, and have been sourced from a children’s marching set, meaning I suppose they are still proper musical instruments, but they are small. It’s hard to tell from the photograph, but the instruments have been carefully set up on stands for this very concentrated experiment recorded in Zurich in 2019. The triumph has been to extract so much information from this limited set-up; it’s mostly about audio and sound generation, so rather than a jazz-influenced “drum solo” record, or an example of extended improvisation, this Souvenirs emerges as a protracted exploration of tones, timbres, textures, and frequencies. On the drum side, broadly the focus is on creating patterns and pulses and rhythms; because of the nature of the playing, these sound very unusual, and half the time you’d be forgiven for thinking this is an electronic album. But it’s not, and Wolfarth creates all these diverting and strange effects through acoustic means. On the cymbal side, there are still certain pulses driving the music, but mainly what I tune into here is the sub-layered drone that is happily trundling long underneath the sizzling surface of metallic tones. This drone may be some sort of ghost frequency, a phenomenon not unlike a combination tone; however it may be generated, this is all part of the intended effect.

Jon Mueller, the American drummer known to us for many years via the Crouton label, points out in his inserted notes what a remarkable feat has been achieved by Christian Wolfarth, reminding us that the physical stamina necessary to do this is quite considerable, leaving aside the mental effort involved in the concentration. Wolfarth has been compelled to explore this path of enquiry due to his concerns about “overtones and strange interferences”, as noted above. He’s been aware of it ever since he first played the drums as a teenager in a local rock band. After he first set up his kit, he was massively disappointed with the way things came out – “it sounded awful” is his frank assessment of the situation. His yardstick for success was the way drums sounded on a studio recording, which of course is quite a different thing to setting up in a rehearsal studio. Years of practice and playing, and pursuing pathways that led him to jazz and to new music, saw him constantly trying to compensate for this awful sound. He experimented with many different kits, and he also pared things down, simply getting rid of the instruments that displeased him. It’s this process of simplification, I suppose, that finally led him to choose a single drum and cymbal for this record.

The takeaway of this lesson for me is that a full drum kit evidently produces far more sound, and more conflicting frequencies, than I had previously assumed; from now on I will pay more attention to those stories (and others of their ilk) about Led Zeppelin and why Page set up John Bonham’s kit in a certain way to record ‘When The Levee Breaks’. Anecdotally, I was also impressed when a studio engineer at Resonance was able to identify instantly on a record when a drumkit was being played in a rehearsal studio (the record in question was Sara Goes Pop). Souvenirs is an intense study, not always an easy listen, and careful attention must be paid to its insistent minimal groove; ultimately it is very rewarding however. Vinyl release only, pressed in semi-translucent vinyl. Arrived 16th July 2020.