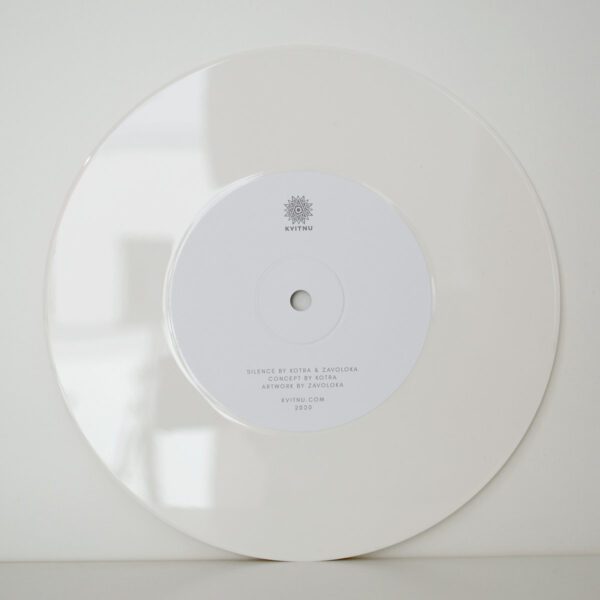 Much to my chagrin it looks as though the Kvitnu label is shutting up shop…we’ve followed this label since quite an early time, and enjoyed a lot of the original music released under its impress, which I would characterise mostly as a very muscular strain of avant-techno with lashings of noise and vicious razor-edged beats. Dmytro Fedorenko was the label boss, and he also recorded as Kotra; the cover designs, including some impressive packaging and printing ideas, were created by Kateryna Zavoloka under her Zavoloka nom de plume. For a long time they were based in the Ukraine until around 2014 they went to Vienna (although this one was sent from Berlin); I think the last item we received was 2019’s Voin Oruwu album Etudes From A Starship, although there have been a few file-based releases after that one.

They’ve decided to go out in a “conceptual” style with Silence, which is a 7-inch single pressed with a silent lock groove. It’s in white vinyl, a limited edition, and the catalogue number is KVINTU 0. Inside the cover are printed a series of quasi-philosophical utterances, all of them in full capitals, such as “silence is a state and an instrument of inner transmutation”. Indeed the whole text is somewhat preoccupied with the notion of “transmutation”, with its rather trite references to alchemy and the philosopher’s stone. I’m baffled; after years of publishing such maximal and noisy music, I have no idea why Kotra and Zavoloka would elect to do something like this. Silent records and lock-grooves are not especially new, and the self-styled concept of this Silence record is rather thin. Still, as a statement of total finality, I suppose you can do no better than assigning it the number zero. It implies something about a “hard reset”, a tabula rasa, so let’s hope these talented players find a way to continue doing their music in a way that doesn’t involve the soul-destroying work of running a record label. (24/09/2020)