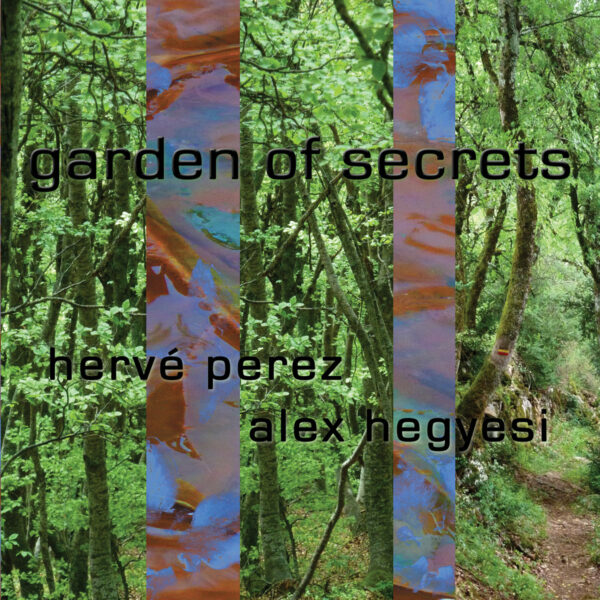 Hervé Perez has joined up with Alexandru Hegvesi to produce Garden Of Secrets (DISCUS MUSIC DISCUS 97CD), a new release on Discus Music. Hervé Perez has often played with Martin Archer (label boss of Discus), starting out in 2006 with an album called The Inclusion Principle, a name which they later gave to their duets where they improvised freely, blending digital effects and computer manipulation with woodwinds, with results that I dare say were accessible to lovers of many genres – electronics, jazz, improvisation.

Perez also does a fair bit of solo work and recently started his own Nexttime Studios label to showcase his work; effectively it’s a sub label of Discus Music. He first worked with Romanian player Hegvesi in 2010 on the Winds Of Change album. Today’s offering Garden Of Secrets downplays the computers and digital processing in favour of real instruments – Perez plays the soprano sax, but also spends a lot of time with his favoured shakuhachi flute, a move which might endear him to David Toop. Other ethnic instruments, such as the Tibetan bells, the Nepalese flute and the bodhran, also pass under his hands. Hegvesi appears to be more of a string player and is credited with the dulcimer, the gusla, the zither, the psaltery, and the prepared cymbalum; he’s not afraid to apply plucking and bowing actions to these instruments where needed. Also a percussionist, he plays the bamboo chimes and something intriguingly called the “shaman drum”. Perez wishes to stress, as he does in the press notes, that Garden Of Secrets is a very composed album, and the key words are “sound design” and “composition”, and there’s much evidence that he has spent time listening to the improvisations and doing a lot of arranging and editing (“scalpel cutting”, as he calls it, indicating the precision behind these aural mosaics) in the studio. It’s as much a canvas of electro-acoustic composition as it is a document of improvised music; and field recordings are also involved in the grand design.

Although there are a couple of lively tunes which could pass master at an open-minded jazz festival, ‘Abandoning Of Sorrow’ being one of them, the album is mostly a suite of very calming mood music, creating a serene bliss and meditative framework for the listener. Indeed the word “meditative” may not be wildly inappropriate for an album which contains hints of non-Western spirituality and religion, a theme which is further echoed in the specific use of instrumentation, and certain track titles which allude to devotional tasks and ecstatic states – e.g. ‘Slow March of the Pilgrims’ and ‘Shaman’s Dream’. The intention of Perez is to remain non-specific and explore these areas “from different angles and moods”, and the work has grown into “some kind of orchestral folk ritual”. From 10 September 2020.