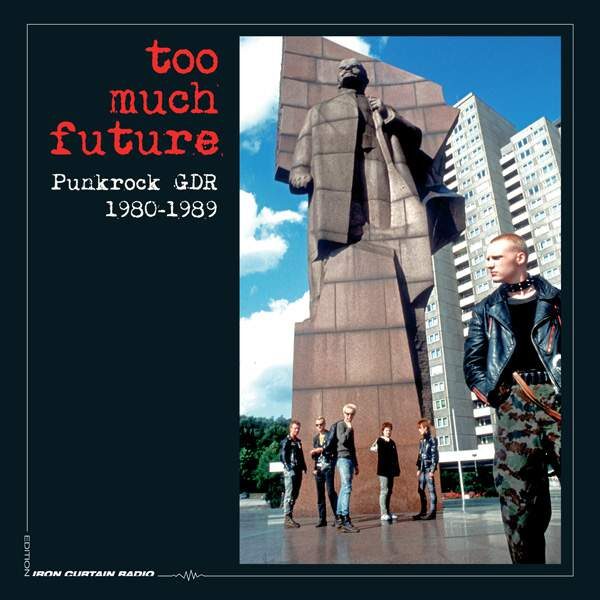 We heard from the Iron Curtain Radio project with a double LP in 2018, entitled Notes From The Underground: Experimental Sounds Behind The Iron Curtain 1968-1989. We got quite excited about this record, as well as the research behind it; the Unearthing The Music project continues to thrive and is steadily growing its database to document the work of near-forgotten bands who operated in this time frame, specifically in parts of non-democratic Europe. This means that any country that has suffered political unrest or tensions stands a chance of inclusion in the collection policy. It so happens that most of these bands also create exciting music; all of them examples of how art can flourish in the underground.

The work continues with today’s release, Too Much Future: Punkrock GDR 1980-1989 (EDITION IRON CURTAIN RADIO ICR 001). This has been published as a double CD and also a 3-LP box set; I think the latter contains a lengthy booklet (100 pp) with extensive annotations about each band prepared by the co-compiler Henryk Gericke, as well as many photos, but I lack this information on the CD version I have in front of me. 38 tracks, showcasing a large number of virtually unknown punk bands, and even including a 23-minute live set called Ex-Cert recorded more recently in 2005. Don’t feel bad if you haven’t heard of Namenlos, Menschenschock, DDR Terrorstaat or L’Attentat; I don’t think many people have. All of these bands were taking a tremendous risk by making punk records or performing live in the German Democratic Republic, which until 1990 was effectively a communist state. I never knew this, but apparently you had to get a special permit from the authorities before you could form a band, presumably so that the state could monitor what was taking place in the name of “culture” to be sure they could approve it. The bands on Too Much Future didn’t have any such permit, so effectively what they were doing was illegal. Right there you’ve got an indication of a genuine “underground” credential, which helps puts things in perspective; although The Sex Pistols may have affronted common decency and good taste at every turn, I don’t think they ever broke the law.

It seems a lot of these DDR bands never even played live, making it all the more remarkable that these fragile three-minute statements have even survived at all; if there were any live gigs, they had to be arranged in a clandestine manner, as though they were anarchists plotting against the state in secret. Some of the band members even went to prison in the name of this cause. It looks like some of the bands had a stab at a career in music; Müllstation, for instance, carried on making records into the 1990s for Horst Barthel’s label Nasty Vinyl, indicating that the music didn’t stop after the fall of the Berlin Wall. However, when you purchase this set you’ll be hearing a lot of music which apparently has never been heard before, indicating the lengths to which our devoted team have gone. Whereas the record Experimental Sounds Behind The Iron Curtain was very varied musically, featuring many different styles and approaches, use of electronics, jazz-prog crossover moves and the like, shading into RIO styled music, Too Much Future is exclusively raw guitar punk with harsh vocals and crazed drumming; be prepared for an extremely intense listen. Even fans of 1960s raw garage punk, or the Killed By Death compilations of unhinged US hardcore punk, may find this set heavy going.

Besides the incredible urgency of the music, what mainly comes over is the extreme disaffection and alienation of the musicians, with voices and instruments expressing every degree of protest from barely-contained rage to a near-sociopathic mental state bordering on violence. In between, there’s also plenty of other dark and angsty emotions including paranoia, boredom, terror, and general unrest, all of them expressed through primitive music where you can hear the musicians struggle in real time for some form of articulation. As a non-German speaker, I can’t understand a word of the lyrics, but everyone here speaks a universal language of hate with a message that can’t possibly be misunderstood. If the GDR state was in fear of bands like this, they had every reason to be. Virulent critiques of political and societal failure are captured in these short energetic bursts, in the most raw state imaginable; the voice of those demanding to be heard. Truly subversive, well-nigh dangerous music, which still carries a charge today.

I don’t say this is the first such compilation of this music – there may have been other representations on the Plastic Bomb Records label in the 1990s, but I’m not really qualified to say. We might also point out this music is probably nothing to do with the whole NDW thing, which although also connected to East Berlin, anarchy and squats, had an “art” agenda to do with improving music by splicing up punk rock with reggae and synthesisers, neither of which features here at all. The compilers Henryk Gericke and Maik Ratte Reichenbach are uniquely qualified to produce this record; Gericke was the singer in The Leistungsleichen from East Berlin, while Reichenbach played bass in H.A.U. in Leipzig and in L’Attentat, the latter regarded as one of the more important bands in this area. At a time when there seems to be a real deficiency of critical political engagement or seriously oppositional spirit in music, a compilation likes this documents a moment when people were impassioned enough about personal freedom to express it through this angrified, semi-articulate noise, and take a stand against the powers that be at considerable personal expense to themselves. A must!…from 19th August 2020.