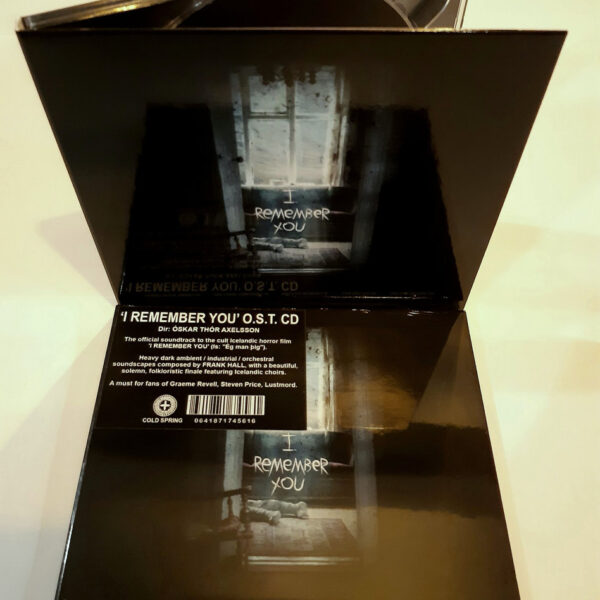 The official soundtrack to the 2017 Icelandic murder mystery / horror film of the same name, co-written and directed by Óskar Thór Axelsson, “I Remember You (O.S.T.)” is a set of brooding dark ambient mood pieces composed by Frank Hall that mix elements of ambient, industrial, orchestral and Icelandic folk music. All 14 tracks on the album are short with the majority of them being less than four minutes in length. While the album is intended to be heard in one sitting with all tracks in their proper order, the experience can be very heavy-going. The industrial and orchestral elements are very solemn, slow and droning, and do not change much from one track to the next within their limited range, dominated mainly by brass or brass-like instrumentation and mostly low-pitched sounds. A few tracks like “Freyr”, “Sigling” and “Laekurinn” break out of the slow-low-drone template with industrial beats, sudden abrasive metal slash or solo piano melodies but they are few and far between in an album of sombre funereal mood music.

The one track that departs from the rest and which listeners are most likely to remember (for one thing it comes at the very end) is Hall’s adaptation of an Icelandic folk song, “Móðir mín í kví kví (My Mother In The Sheep Pen)” which features choral singing with mournful orchestral drone accompaniment. The Icelandic lyrics are based on an old folk legend of a woman who is pursued and punished by the ghost of the newborn child she abandoned. As Hall notes on the album’s Bandcamp page, the song was often sung as a lullaby by mothers to their children, which sounds quite gruesome but a quick scoot around on Google led me to a website with more Icelandic lullabies that sing of death, hardship and sinister phantoms.

If you happen to be a fan of the film or of director Axelsson’s work, you might find this album indispensable but for everyone else, this album does not have enough intrinsic interest and is too wedded to the film to stand as a work in its own right.