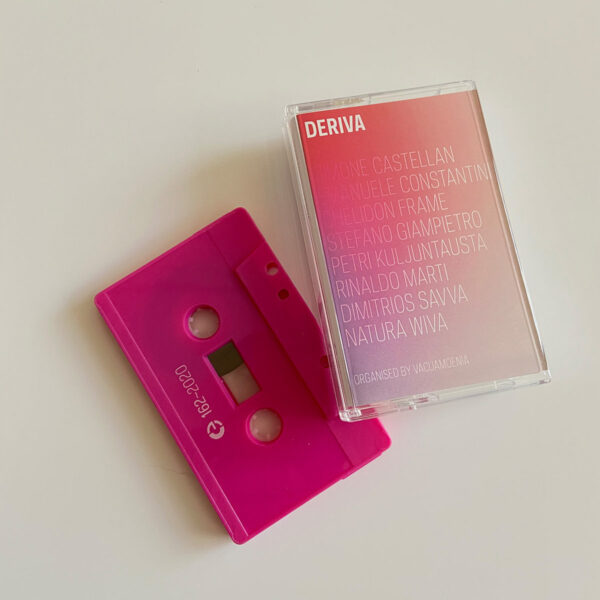 From same label who gave us Roel Meelkop this season, a “various artists” special called Deriva (CRÓNICA 162-2020). On it, we have a number of sound artists and electro-acoustic composers, an international selection of same, although the majority of them are from Italy. Most of them are making their debut here, although Chelidon Frame have a history going back to 2014 making abstract or dark ambient music, and Emanuele Costantini did a file-based release of his field recordings for a Portuguese net label in 2011. Composer Petri Kuljuntausta stands out here as the only Finn on the tape, and I recall we heard him with Momentum in 2004.

From reading the press notes to Deriva, I first thought we might be getting audio works inspired by the Dérive concept of Guy Debord and practised by himself and his Situationist buddies; but it turns out the creators intend something quite different, and name-check all manner of high-flown ideas connected to entropy, psychology, and “abandoned landscapes”. The idea for the collection came from the Italian project VacuaMoenia, who commissioned these works, and may have attempted to influence the creators with their ambiguous, quasi-philosophical notions about “acoustic ecology”, as they call it. Several lengthy episodes of slow-moving drone and mysterious noises are the results for the most part; I found it largely unengaging and bereft of original ideas, but there’s a few minutes of Stefano Giampietro‘s work which I liked, when he keeps it focused and simple and even manages to inject a bit of tension into this soporific tape. Dimitrios Savva from Corfu is also a stand-out, his ‘Noise Triangle’ saying more in his allotted three minutes than most of these discursive types manage in ten times the duration.

Petri Kuljuntausta probably scoops the prize on this occasion, as he delivers an imaginative synthesis of water sounds and electronic generation that is truly integrated and cohesive; if there was a brief behind this commission to try and say something interesting about the landscape and raise ontological questions about it, he’s surpassed all expectations. If you click on the Bandcamp links, you get the full-length versions of all the pieces, while the cassette tape release offers edited versions of same. From 2nd October 2020.