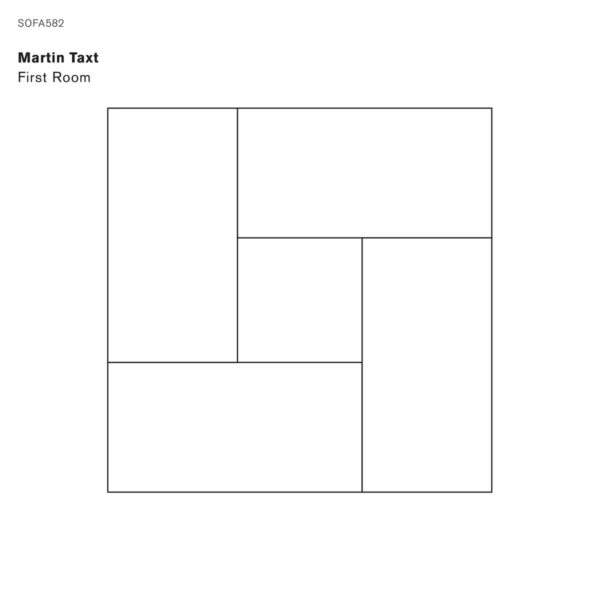 We’ve heard a fair bit from Martin Taxt, the Norwegian tuba man, over recent years – including for instance his fine work with the Muddersten trio in Norway, though he also played on hjem for Mikroton and made Pan On Fire with Toshimaru Nakamura. We’re always reminded that Taxt plays his tuba in a “microtonal” manner. Me poor man not always sure what this means, but it might be that he eschews conventional notes written on a composed stave in favour of generating long and subtly-varied tones that can’t really be scored in any normal manner.

Having briefly mentioned some of those collaborative projects, it seems a good time to mention that First Room (SOFA MUSIC SOFA582) is his first “solo” album, although as it happens he performed this single 35:30 minute work with Inga Margrethe Aas, who is credited with the double bass and the viola da gamba on this record. Right there with a tuba and an upright bass you’ve got plenty potential for lower-register subsonics and ground-rumbling bass tones, which is what this record delivers like so many crates of lead-lined concrete arriving on your doorstep. Especially if you can get some tall speakers and crank up that there volume dial to dangerous proportions. But Taxt is also a thoughtful and subtle player / composer, and quite often there’s been a subtext or hidden meaning to any work he’s involved in. This First Room is something do with exploring architecture and music, one of those “spatial” concepts which seems to hold a lot of interest to many sound-art modernists lately, for instance Michal Jacaszek, Philip Sulidae, Torba, Eugeniusz Rudnik, Mouth Worker, and Jos Smolders. Some of the above try and address the whole issue of the built environment in their work, but Taxt focuses his attention on something smaller and simpler. The cover image is a floor plan, a plan which may have a connection to the design of a Japanese tearoom and something called a “tatami” mat, which I now learn is something unique to Japan in floor design, and which follows very precise rules about size and shape. Taxt has used this pattern as the basis for his graphical score; I thought it was this same score that is reproduced in the enclosed booklet here, in dense lines and grids of monochrome which Sol Lewitt would have been proud of, but in fact it’s stills from Kjell’s Bjorgeenen’s video which you could have scoped if you saw it at the Norwegian Academy of Music in October 2019.

On the finished record, there’s a mix of recorded material and live material, the work was recorded in the same room over two days, and it’s largely an exercise in timbral ambiguity. The changes in pitch and texture are so gradual that it’s not really clear what’s going on. If the idea about Japanese architecture is create some sense of stability, Taxt prefers a more unsettling sensation of the ground gradually shifting below our feet. To present this suggestion of chaos slowly unfolding, the two players execute their moves with a supremely cold-hearted precision, to devastating effect. From 2nd October 2020.