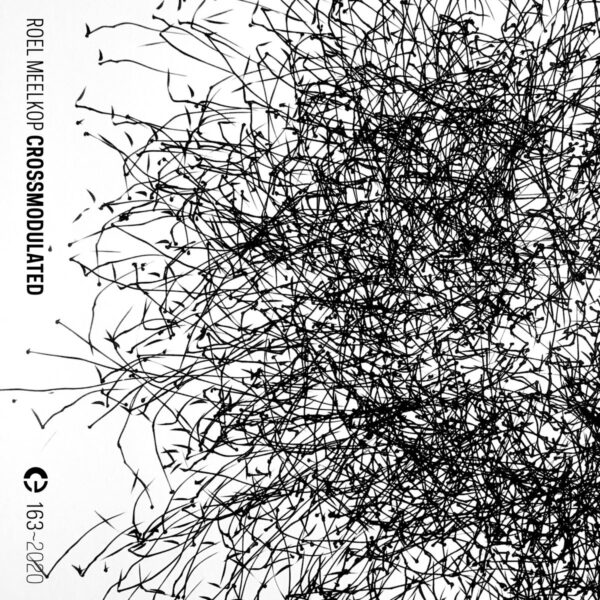 Roel Meelkop is a Dutch hero of sound art who I find it convenient to put in a Netherlandish seraglio with Peter Duimelinks, Jos Smolders, Frans de Waard and Machinefabriek. Indeed we last heard from the Roelster on the Cryptonesia record where he performed as Wieman (with de Waard) to produce an extensive reworking of two cassette tapes by Cybe. That was in 2017. Now in 2020 he’s getting into the exciting area of modular synthesis (I think this is getting easier to do with the invention of DIY miniature devices like Plumbutter, but I don’t really know an awful lot about it).

Meelkop combines tapes from his large collection of field recordings with sessions of modular synth work, and that’s what we hear on today’s cassette Crossmodulated (CRÓNICA 163-2020), which in title is a very descriptive name for the process and for the results, you’ll admit. Roel freely owns that he is borrowing the methods of Jos Smolders, who did it recently on his album Nowhere, released on this same label in 2017 and noted here. Roel has been grateful for the introduction to modular synthesis and feels that his studio work has been given a new lease of life by it. On these five Crossmodulation experiments, our man is already exhibiting supreme control over these audio events, mastering the forces that swell and rise like the rare undersea balloon fish of Bermuda. One can barely detect any “real” sound that may have survived from the field recordings (with the possible exception of odd voice-like murmurs on #3 and #5), but the process that’s relevant is more likely to be the way that sounds are sculpted and shaped by the hummulating and juddering of the black boxes, whatever devices they may be, hopefully cross-linked by various cables and jacks inside Roel Meelkop’s powerhouse of a studio.

The general pattern of execution seems to require that a piece starts out small and uncertain, then gradually grows into an unstoppable landau of pulsatering noise, firing out poison pellets and radiating waves of alien ray-gun force as needed. True to its name, this whole tape is a gardener’s delight of cross-breeding and transplanted strains of buds growing inside other buds. Fave cuts for me are #1 and #2, as they seem more inclined to whizz away out of control at crucial moments; #4 just scowls and sits there like a lump of sour dough that’s daring us to throw it in the trash bin, and #3 is intriguingly mysterious but also feels a little throwaway. ‘Crossmodulated 5’ exhibits minimalist tendencies that Machinefabriek would probably commend; in fact, the dancing on head-of-pin tiny dots of sound would have their place at the annual Asmus Tietchens tribute festival, an event which I just made up, in Stuttgart. From 2nd October 2020.