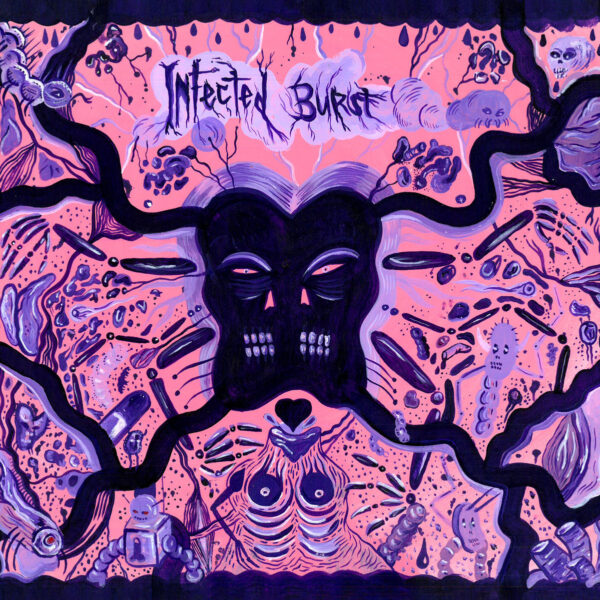 Chaotic and noisy electronic-improv crossed with rap elements from Infected Burst on their self-titled release (VIANDE RECORDS VIANDE24) …the Italian duo Burst, i.e. Tom De Testa and Emilio Berne, have increased their force by joining up with Mario Gabola, the sax player who happens to run Viande Records, is a member of Strongly Imploded and A Spirale, the latter whom we heard in 2019 on their Autocannibalism record with Chris Cogburn.

Infected Burst is a riot of full-on playing, and every space is filled by indigestible noises from a wide panoply of untamed sources, including live electronics, scatter-gun samples, random drumming, and feedback saxophone. As noted, the players also profess an interest in rap and hip-hop, but they have a very extreme interpretation of what this means and their attempts within this genre are unlikely to please any listeners from the Mo Wax camp. 90% of the record operates in the noise-based free improv zone, and while they do this with a tremendous amount of gusto and elan and pent-up fury, they lack any sense of structure or group dynamics that might give their work a bit more impact. As a result, their energy just tends to drain away after 2-3 minutes of frenetic flailing, and leaves the listener rather exhausted and unsatisfied. Even so, as an accurate picture of the modernist chaos we’re all facing just now, it’s hard to beat; and Infected Burst do manage to unleash a few genuinely original noises in among their crazy eruptions and spastic fits of passion.