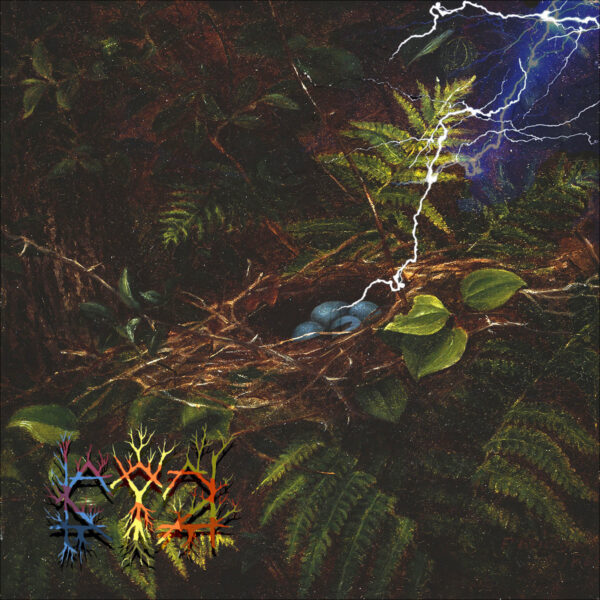 An electrifying and deeply soulful work that I consider should rate as one of the top black metal releases of 2020, this album by Brazilian one-man atmospheric BM act Kaatayra is definitely non-electric in its use of acoustic guitars playing all the tremolo-chord riffs and melodies typical of immersive atmospheric BM / blackgaze together with drums, electronics and Brazilian folk instruments. Kaatayra man Caio Lemos takes his inspiration from nature-themed Cascadian BM acts and their allies like Wolves in the Throne Room, Ash Borer, Falls of Rauros, Skagos and Panopticon, and with other musical influences (among them US experimental pop bands Animal Collective and Black Dice who I only very vaguely remember, having heard a few of their albums long ago), and elements of Brazilian tropicalia music, creates a very individualistic work of hypnotic blackened folk rock psychedelia with a mystical shamanistic bent.

All four songs on “Só Quem Viu o Relâmpago à Sua Direita Sabe” (the title translates as “Only Those Who Saw the Lightning on Your Right Know”) are very long, reflecting the spiritual quests undertaken which conform to no linear structures that require a beginning, a middle or an end, and in which past, present and future are occurring all at once in the moment. As a result, each track is not so much a song in the conventional way we understand a song to be, but is a self-contained world of different musics flowing into and out of one another. There is though a definite progression from the acoustic blackened folk and aboriginal Brazilian musical elements in opening track “Chama Terra, Chama Chuva” to the more varied music of later tracks and the experimental BM / electronic pop fusion psychedelia of the last track – almost as if we are experiencing the history of Brazilian music through a blackened folk lens (and through that unusual musical history, a spiritual evolution) in the space of less than an hour. The music is soft in its sonic textures yet aggressive in its pacing, especially in the BM riffs and melodies, and in the singing which combines harsh anguished BM vocals and more soothing clean-toned singing and crooning.

The album starts to hit its stride in second track “Desnaturação de Si-Mesmo” with the most heart-rending soulful melodies and riffs that take on a more pop-oriented feel with electronics added to the mix of tremolo acoustic guitar and more straightforward strumming, complemented by highly emotional BM rasping and clean singing, before morphing into mostly instrumental tropicalia with Afro-Brazilian beats and very minimal raindrop guitar playing. So absorbing is the music that the combination of cool laid-back tropicalia and harsher BM, going into epic post-BM, seems not at all jarring or even surprising – the styles of drumming used on the album and the even low-key nature of the music with its soft textures set the listener up to accept the most unlikely juxtapositions and fusions.

Later tracks bring listeners back to the blackened acoustic folk and the speedy synth drumming but they do have the feel of being footnotes to “Desnaturação …”, the undoubted highlight of the album. Even so, the music is still very good and deeply emotional. The title track has moments, very post-BM wistful and even weepy, where the listener is transported to another plane of existence, where the world is a much better place, and this level of existence, possible if only we could open our hearts and minds to it and allow enlightenment to guide our thoughts and actions, is pure, innocent and radiant compared to our current sordid existence. The last track opens with a warm passage of formless drone electronica, spiritual and transcendental in mood, before dropping back into familiar post-BM territory and ambient background cosmic space drone.

I do think the singing could have been a bit more upfront in the mix as the use of both BM and clean singing actually brings out the pain and existential torment of being human and thus being a member of a thoughtless and destructive species. “Desnaturação …” is the most inspired track in its unforgettable melodies and the fusion of blackened folk and cool Tropicalia – I didn’t see that one coming! – and the first track is not far behind in combining BM with some indigenous Brazilian shamanist music elements. I confess to finding the last track a bit underwhelming after its impressive droning introduction, with parts of it a bit too happy and poppy after all that has passed before and the music disappearing into drone. Constant to-ing and fro-ing between the core blackened folk and other styles on later tracks starts becoming a bit tiresome even though the music is good.

Even with its flaws, the album really is a stunning microcosm of Brazilian music and reflects something of Brazil’s post-1492 history, with all its early savagery, the later hopes and promises of social progress associated with the Tropicalia genre, and the setbacks and repression that have thwarted (and which still) frustrate the majority of Brazil’s people. Spiritual evolution and a cycle of going out / return, parallel to the cycle of birth /death / rebirth are all contained in the music as well. For an album to combine all-acoustic BM with indigenous, folk and more contemporary Brazilian music, and appeal to listeners in and outside Brazil, is an inspired feat and one that Lemos / Kaatayra has achieved with plenty of creative and original if eccentric ideas.