Two new records from Tim Olive, the Canadian improviser living in Kobe Japan. As ever he favours the simple duo collaboration format, with concise albums which never outstay their welcome, released on his own 845 Audio label.

In summer 2020, Olive’s plans to tour the UK were cancelled because of “The Reason”. Undeterred, he sent a telegram to Phil Maguire, the Scots electronic minimalist, with whom he had planned to perform; he suggested they do a long-distance collaboration. The results are published here as Invoer (845 AUDIO 845-15). In order to keep things as cryptic and simple as possible, the only ground rule for this project was the “ten minute” rule – each player would lay down a series of ten-minute solo tracks, with no discussion whatsoever as to form, content, meaning, or style. What’s ended up on the grooves is a result of editing, mixing, and overlaying, processes I believe mostly carried out by Olive. It’s a winning combination and certainly one of the more minimal records we’ve heard released under the Olive banner. Perhaps unsurprising when we look back at the Maguire releases and collaborations we’ve been hearing since 2016, some of them published on his own Verz Imprint 1. A lot of his work is done inside the computer – not that I really know what that means, but his delving into digital process and routine has resulted in some incredibly remote, sealed-off, and distant music.

On this occasion, there’s a synth involved as well, and while Olive is playing his typical magnetic pickups and electronics, it’s the Maguire tone of desolation and isolation which has the upper hand. Track two in particular (no tracks have any titles, of course) conveys the sense of faded morse code messages from 100 years ago struggling to make their way down an ancient telegraph line, and even when they arrive, it turns out we have no means of decoding them. It’s a plausible metaphor for what the world turned into – almost overnight – during 2020; systems we used to depend on have been called into question, and we have to find new ways of adapting and coping. The duo grow more agitated and create more eventful music on track 3, although it remains extremely abstract and innovative, challenging the listener to discern an underlying pattern in among the mysterious buzzes, whirrs, and reduced tones. There’s also the quiet apocalypse implied in track four, which passes on an impression of a slowly burning building; as though we were receiving a broadcast from a once-great city, now in ruins, and witnessing the sad collapse of everything. Forlorn, yet wiry and determined music. 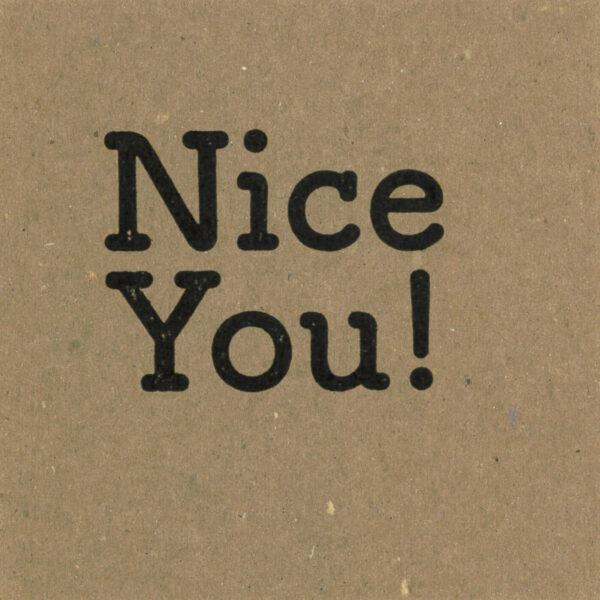 Second item Nice You! (845 AUDIO 845-16) is a duo with Chris Dadge and dates back to a date in June 2019, pre-COVID-19, and it represents a time when Olive was in Calgary and met up with his old friend Dadge while he was on a Canadian tour. Chris Dadge is an improvising percussionist, though he seems to occupy that end of the wedge which involves a very unconventional approach – playing objects, small found items, making use of broken electronics, and weird tunings, that sort of thing. He also plays with a number of like-minded Ensembles and has been running the Bug Incision label since around 2006, releasing his own recordings and those of other lesser-known Canadian players.

Unlike the Invoer item, this record is a document of a physical meeting between two human beings who sat together in the same room making a noise on a single day in the studio. They brought their respective specialisms – Dadge his percussion devices and his numerous objects, Olive his usual magnetic pickups – and they were both twisting the dials on their electronic boxes for additional voltage fun. Add to this that both players were amplified and there were numerous guitar and bass amps in the room, and you can guess how the story turns out. The resulting noise-fest of unhinged mania was such that local Heavy Metal stoner band Chron Goblin, who were laying down tracks for their new album in the main studio upstairs, had to come down and see what all the racket was about. The situation grew tense pretty quickly, but luckily Tim Olive’s minders were close at hand to defuse the moment, and everyone went home with a Chron Goblin T-shirt.

Just two tracks on Nice You!, with the opening 12:50 blast representing a high watermark in terms of dense, insistent, sound; one would love to call it guitar-drum interplay, but it isn’t really anything of the sort, as both of these players have deconstructed their kits to a very extreme degree, and instead we have something much more skeletal. The second track is much longer at 22:10, but less compelling somehow; I dislike all the air and space in the piece, preferring a thick fug of crunchy noise that’s so solid I can use it to repair the fence. On the other hand, there’s still that same insistent tone, which on this occasion verges on being naggy and repellent, both qualities to admire and respect. Indeed it was this “nagginess” that Chron Goblin secretly envied, and were soon quizzing their fellow Canadians as to how they could achieve this sound, using their expensive guitars and amps. Olive’s unprintable response to the long-haired stoners has been subsequently cleaned up, and used as the title for this album.