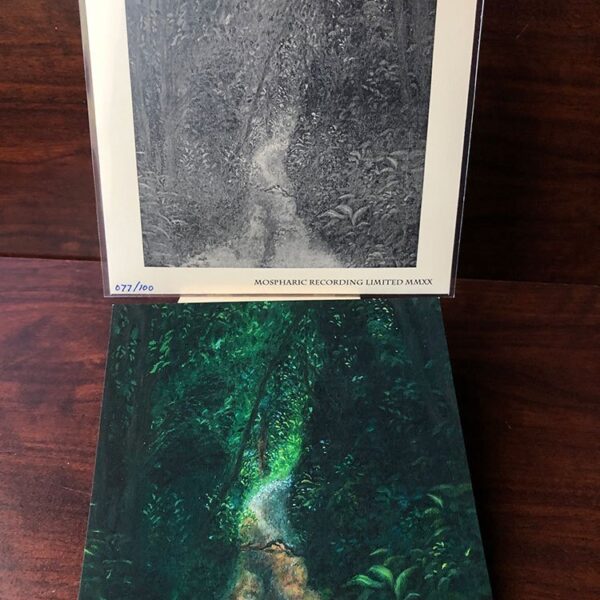 After the astonishing and exhilarating effort that was “Só Quem Viu o Relâmpago à Sua Direita Sabe”, I’m probably expecting too much from Caio Lemos / Kaatayra to follow up with another album just as offbeat and inspired. As it turns out, “Toda Historia pela Frente” came out not very long after and is a straightforward atmospheric BM album, electric tremolo guitars and all, with non-BM or acoustic music and effects being used to flavour the music instead of being part of the main course. In their place though is an emphasis on drama and deep passion that was not so apparent on “”Só Quem Viu …” – indeed one of the first things about “Toda Historia …” that strikes listeners is how very deeply angry and furious the music and the singing are here, in contrast to a cooler and more detached attitude on the previous album. So strong are the emotions that much of the singing on this album is drowned out by the music, hell-bent on hunting down whatever demons are infesting it to obliterate them.

The three tracks on this album are very long and epic, not only in the music but also in mood and atmosphere. Each one of them, with a few tweaks, could have been a one-track EP or album in its own right. “O Castigo Vem à Cavalo” leads the way with harsh and aggressive BM for most of its running time until the last five minutes when it changes into an all-ambient instrumental with a tribal percussion rhythm. The mood changes from intense rage to wonder, at least until undercurrents in the background turn into hurricane BM storms and swallow the cool clean synthesiser melody. Likewise “Toda Magoa do Mundo” is raging torrential atmo-BM with a melancholy air and thrumming bass lines out of kilter with the rest of the music until just over the halfway point, at which it becomes instrumental acoustic darkly brooding Brazilian-style country-&-western. Sampled birdsong is present and the drumming rhythms assume a martial air.

At 26 minutes the last track “Miseria da Sabedoria” could have been hived off into a separate release, so majestic and monumental it is in the way it sprawls over several riff loops and the emotional roller-coaster the singing and the instrumental guitar and machine-gun blast-beat percussion blast through. At critical points in the music dark brooding or galloping country music or quiet all-synthesiser ambient melody intrude and take listeners through intense spiritual detours in the journey. The drumming can be impressive, even monstrous in its intensity later in the track, and it is possible that the percussion rhythms have as their inspiration Afro-Brazilian drumming groups.

While the music is very powerful and clear in its production – the bass especially can be heard beneath the angry tremolo guitar showers – the album as a whole comes over as no more than another atmospheric BM / country / folk fusion. The singing is good though its range is limited: it’s either harsh and raspy BM-style shrieking vocals or subdued clean-toned crooning. At this point in Kaatayra’s career a guest vocalist might be necessary to give more variety and expand the scope of the music. Parts of the long tracks can seem excessive to listeners – the drumming on “Miseria …” carries on for several minutes with not much variation – and the level of intensity can be draining on listener attention spans.

My impression is that this album was released too soon after an illustrious predecessor. It needs tightening up and a much more distinct musical identity. Letting it rest a while before release might have given it a chance to show its flaws and gaps where more musical variation is needed. It could have been a great album and a worthy successor to “Só Quem Viu …” . Instead I feel this album is treading water for the next release.