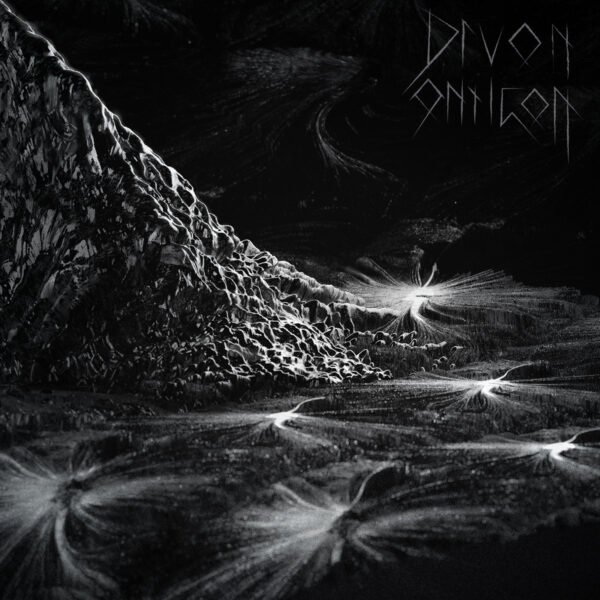 “Desontstijging” (meaning “dislocation” in English) is the aptly named debut album of Druon Antigon, the solo cosmic BM project of Belgian-based Lennart Janssen which melds together darkspace BM soundscapes, doom metal elements and noise electronic glitch into a mighty mind-dislocating monster indeed. As far as I can tell, Janssen seems to be a newcomer in BM, having only become active in 2020 with this project and another experimental BM project he co-founded (with Brazilian musician Nuno Lourenço) called Thermohaline.

Opening track “Zinloos” revels in its sudden manifestation: fresh, sharp, spine-chillingly cold and animated by ice giants whose raspy throttle vocals cut through the freezing space keenly and jaggedly, the song can be very discombobulating as it soars from rapid blast-beat noise BM ice soundscapes to quirky and demented PlayStation video soundtrack mania and back to immersive mind-expanding, brain-busting towers of juddering noise-drone ice. A gleeful and cheeky sonic mind-fuck, “Zinloos” gives fair warning of the strange worlds that lie in front of listeners. “Herrijzenis” is a more straightforward work of eccentric alien twitchy-glitchy electronica, at least until pounding doom rhythms tear through the skies and clicky machine beats and screechy demon voices take over. Whatever style of music dominates at any one time in this track, be it noise or ambient or doom or BM, it is pushed to its most extreme expression with the song becoming ever more confronting, intense and sinister.

Don’t worry, things are even more extreme with “Like Gods”, a sublime and surprisingly catchy exercise in pushing noise glitch electronica to its farthest limits. It’s dark and creepy and scary, and at the same time it has sheer brass cheek and humour in the way swathes of noise and drone sweep out far and then suddenly come right back at you and then swing out millions of parsecs away. The clanging metal hell, when it comes, doesn’t quite match up to the serpentine noise swings and actually sounds stodgy after all that free-form glitch exploration. Stodge disappears though in final track “Weavess” where humanity is confronted with the profound reality of the universe and the place of Earth, and by implication the place of humanity, in that reality. Accordingly the music is at its pummelling heaviest and most intense, the beats churning faster, the guitars racing to more insane and delirious levels, and the electronics effects at once crunching continuously, zooming up and down and around like out-of-control UFOs, and the ambience becoming ever more icy. In its second half the track takes a detour into some very weird (and rather kitsch-sounding) space disco, almost like a wrong turn into a cul-de-sac, before being wrenched back into dark industrial drone blast-beat insanity.

I’d say most listeners, even those who fancy themselves adventurous cosmic explorers, will need a few rounds spinning this album to acclimatise themselves to the bizarre universe of “Desonstijging”. There are moments where the music unexpectedly, perhaps wilfully deflates into something less than it should be, and some momentum is lost which takes some time for the music to regain. The first and final tracks are very unpredictable and the way in which they fall into some unexpected byways and loop back seems odd and inconsistent even by the album’s loopy logic. On the other hand the middle tracks, even with their own flaws, feature outstanding symbioses of extreme metal and extreme noise electronica.

This is truly heady music that should be heard at least once even if fusion BM / electronica might not be your choice of anti-matter jet fuel.