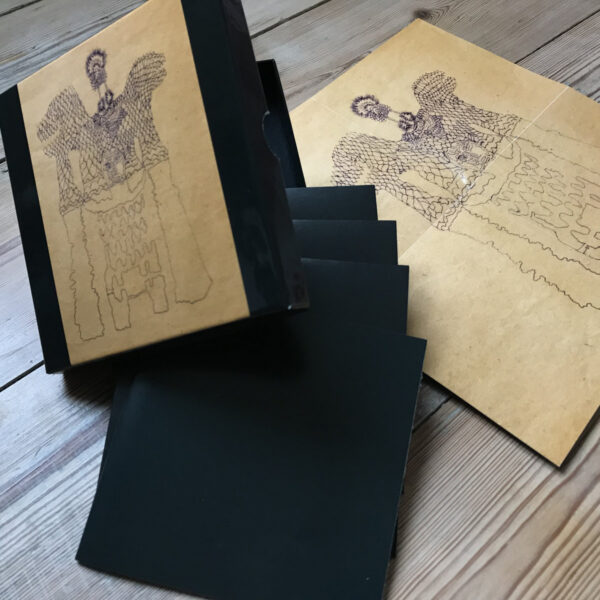 Swedish player Christer Bothén is renowned for his playing of the bass and contrabass clarinets, and I think his career as a composer and improviser only tangentially intersects with jazz…I happen to have the two Don Cherry LPs from the 1970s, Eternal Now and Organic Music Society, on which he appears, and today I learn that it was around the time of this collaboration that he taught Cherry to play the donso n’goni, a traditional stringed instrument of Mali. Bothén spent some time in Mali learning this instrument under Master Broema Dombia, and later he also took up gnawa studies.

Not sure how relevant this is to today’s release Ambrosia (THANATOSIS THTBOX4), a three-CD set of ponderous and heavy drone music made by Bothén’s resonating clarinets…you get two solo discs of the Swedish maestro, plus a collaborative work called Zon which he plays with a small group. It’s a pretty intense and difficult set, slow moving, and Bothén’s compositional intentions seem predicated around acoustic spaces – as far as I can understand them, since he has a penchant for speaking in metaphors that baffles me. For the Ambrosia disc, he uses many sea-fearing and nautical terms to convey his ideas, and hopes to reach “a free zone” through his musical sailing. I thought I might be able to find a way into this record through Zon, the second disc; for one thing, the sound is slightly leavened by the addition of pianos, a double bass, and an intoning voice. But only slightly; our man is joined by three other bass clarinet players, and Zon soon emerges as a major lower-register droner. Plus it’s one with a gloomy backstory, referencing both the Chernobyl nuclear disaster and the Stalker movie by Tarkovsky. Bothén arranged his crew in the room like players on a stage, both for the acoustic sonorities that would result from careful positioning, and because he makes it plain that he intends Zon to be apprehended as a drama, so he wants the “actors” standing on their marks. The composition is well structured, but it’s a grim listen.

The 3rd CD is a single work called Ambrosia lasting 24:32, allowing Bothén to deliver his carefully-measured overblowing toots interspersed with long tracts of strict Protestant silence; one slip and I feel I’ll be sent to bed without my bowl of bread and milk. Like other musicians, he speaks of the relationship between his own body and that of his instrument and articulates his ideas with some precision; but it’s still hard to detect the “improvisation as rebellious action” he mentions, when hearing these stiff creaking movements. This leaves us with the four pieces on CD 1, called ‘Nightrain’, ‘Seismology’, ‘Nothing’ and ‘It’. The first of these does exhibit some agitation about halfway through, where the fingering action is emulating either the motion of a train (or raindrops in the night); I find myself admiring his technical prowess, particularly the breathing, rather than truly enjoying the music. If ‘Seismology’ is detecting an earthquake, it’s certainly giving us plenty of advance warning; a vaguely troubling siren alarm emerges at a supremely unhurried pace, and reminds us that our own mortality is not far away. ‘Nothing’ is about the most minimal piece in the set, a word I hesitate to use as this unique craftsman has evolved his considerable skills to a point some way removed from the so-called “reduced playing” school of musicians, yet I expect some of them might admire the way he makes his breath sound like something as solid and menacing as a block of steel on this rather scary 7:49 piece.

In all, a cold, creaky, and uncomfortable musical experience, but for all that I’m still left with the impression of a rare and singular genius at work here. From 26th October 2020.