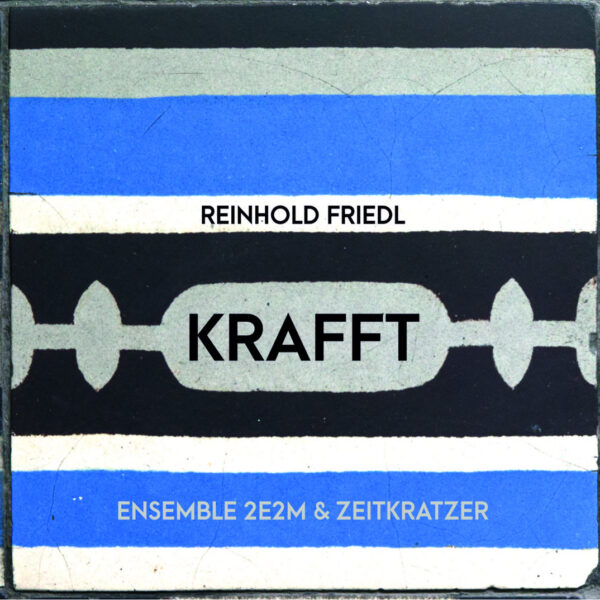 Latest release from Reinhold Friedl is Krafft (ZEITKRATZER PRODUCTIONS zkr0027 / BOCIAN RECORDS zV), a new work of contemporary composition and performed here by his Zeitkratzer Ensemble, plus the French squad Ensemble 2E2M. The latter happened to have endeared themselves to my iron chambers thanks to their renditions of Scelsi, a severe modernist to whom I am somewhat addicted. Together, these two groups form a small orchestra playing brass, percussions, strings, and woodwinds…performing in very strict unison to create the necessary “continuous slab” of sound envisioned by our man Friedl. But we’re getting ahead of our noodles.

Krafft was a 2016 commission in response to heads of state in France, meaning it got premiered in Paris and Marseilles. The last time, I think, we heard an all-classical piece from Reinhold was Quatuor Diotima – Reinhold Friedl which arrived in late 2017, a vehicle for three of his complex and very difficult string quartets, managed with skill and firebrands by the French Quatuor Diotima players. As I recall it the string players were required to undergo physical stress and bodily contortions to make the necessary shapes for this extremely challenging music. On today’s Krafft, the emphasis is quite different. The music is a gigantic, carefully arranged wodge of sound. Everyone plays their notes together, for short passages of discordant, mixed harmonies and tones; their doing so is what creates the hoped-for “unstoppable power” vibe, the feeling of a tidal wave lurching forward in slow motion. The thing that varies is the combinations of instruments, the blending of sounds and voices; this is what gives the music its sense of forward motion, its weird dynamic. It doesn’t exactly proceed in a smooth, comprehensible manner, and its bizarre movements are more akin to those of a large snake, or an overweight coypu.

Both the Zeitsters and 2E2-ers make their way through this dense constellation of composed information with incredible ease, not a foot faltering as they digest this intense melange of data. I use the word “data” advisedly, as Krafft was apparently computer-assisted in no small part of its writing. The Textural Transformation Machine program has been used to realise the work; this software happens to be developed by Friedl himself, as part of his doctorate at Goldsmiths in London; and it wouldn’t be the first time he has used computers to get himself where he needs to be in his ambitious works. For instance. they were used when turning Metal Machine Music into a performable score that could be read by the Ensemble. However, don’t let this coding aspect lead you to expect some form of electronic music (it’s all acoustic), nor let it detract from the power of the central “textural” blast that Friedl is weaving here on the stage.

Even if decoding the structure is not your bag, nor unpicking the subtleties in his incredible mixed harmonies, the sheer weight and volume of these combined orchestral sweeps and their inexorable rhythmic progress should flatten out your over-long toenails in short order. The underlying message is something about “unseen forces”, which might be governing the world (be they political or physical) in ways which we can’t apprehend or understand. If it can help us at least glimpse that process, or become aware of it on some level, that can help us. Music like this is thus one more vital tool in our survival kits, which we will need as things become more unstable and uncertain in the increasing insanity of the 21st century. Excellent. From 19th October 2020.