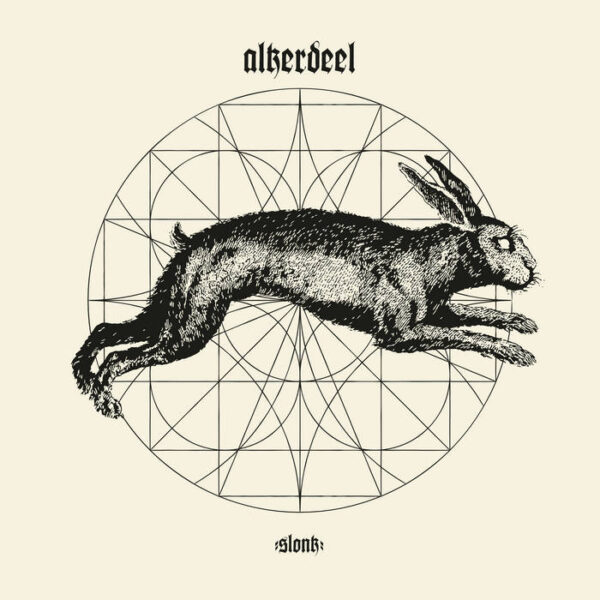 No fewer than two Belgian labels were needed to release Alkerdeel’s fourth album and the band’s first full-length recording since 2016. For an act notching up 16 years in the murky underground zone where black metal, sludge doom and punk meet in what must be a suffocating atmosphere of experimentation, heady and hypnotic though it may be, Alkerdeel’s output has been sparse (perhaps necessarily so in their realm) so the coming of “Slonk” is surely cause for celebration. True, the album is not very long but what it lacks in quantity, “Slonk” more than makes up for in sheer noisy whirling-grit fury and aggression.

The album begins deceptively as a respectable droning sludge doom monster with a little trance psychedelia instrumental introduction to pique listeners’ interest, and for the first few minutes we’re coasting along with the band on heavy swells of noisy droning guitars even as the shrieking drawn-out phantom voices in the background are giving out hints of what is to follow on the rest of the album. Sure enough, after the eighth minute on opening track “Vier” (“Fire”), the Alkerdeel crew drop the rocket boosters and the music breaks into crazed black metal mania and rips through that sonic territory in a flurry of tinny cymbal cloud percussion and repeated stuttery riffing and never looking back. Pede’s vocals are the most tortured and unbearable part of the music: the screaming and the groaning are extreme, and the echo effects and distortion that make the vocals sound as if they were coming from inside an underground crypt rapidly filling up with sand from a sandstorm add to the horror.

The tracks from “Eirde” (“Earth”) through “Zop” (“Water”) to “Trok” (“Air”) might sound the same at first but repeated hearings reveal definite headbanging grooves in “Zop”, the most straightforward melodic if noisy raw BM song on the album, and head-grinding riff repetition on “Eirde” that turns that song into a never-ending barrage of punk-like BM noise. If anything, when Alkerdeel decide to slow down and remind everyone that they’re also a sludge doom quartet, the music seems to lose momentum and spark. In “Trok”, Belgium’s most fearsome foursome go for broke in a song of continuous screaming chaos with Pede tearing his heart and lungs and soul apart as time rapidly runs out in the time Alkerdeel have to stamp their uncompromising gritty style on what is essentially minimal raw black metal rock-out.

It was a good decision on Alkerdeel’s part to leave the droning and much of the sludge ballast behind as those moments when the band slows down lose the fury and the derangement, and the band’s enthusiasm seems to drop as well. The most significant quiet moment comes in “Trok” when the music reaches its climax and collapses into a grim drone that hints it is full of past collapsed universes and the latest one it just swallowed is no more and no less than the other countless meals it’s had. For most of the album the music retains a heavy trance-like droning sound beneath the raging storm and Pede screeches like a man possessed by a thousand crazed and suffering demons. The music is gritty and grimy ugly blackened darkness that becomes ever more intense and concentrated no matter how dark and cacophonous it becomes. This is fearsome stuff indeed and only the very brave – or the very foolish – need approach it.

As the track titles and the front cover artwork with the emphasis on symbols and illustrations that appear to be code for obscure arcana indicate, Alkerdeel delight in pursuing gnostic themes which themselves add mystery to the band’s style and music. “Slonk” gives us a snapshot of another, very secret reality with its own laws and structures alien to and beyond our ability to understanding, which may explain why it seems so disordered and confused to us. The only way to understand this reality is through the symbols, the music and the esoteric language Alkerdeel and vocalist / lyricist Pede use.