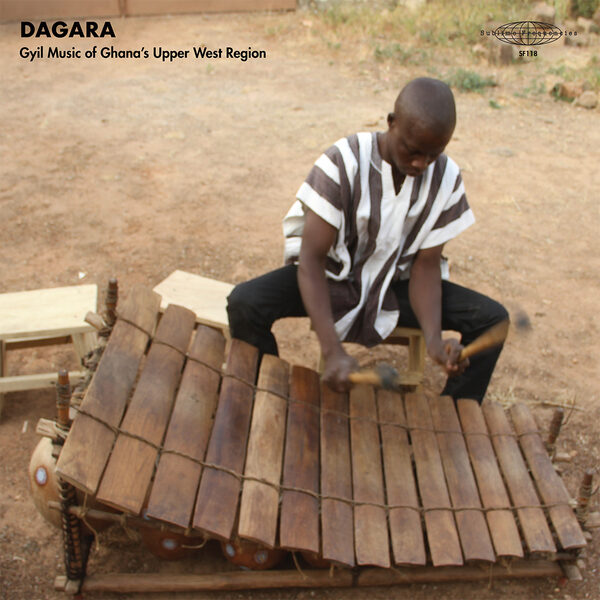 Recorded by Sublime Frequencies label co-founder / co-owner Hisham Mayet in the Upper West Region (an administrative unit similar to state or province) in Ghana in 2019, these recordings of music played on gyil – a type of xylophone with wooden blocks for bars tuned to a pentatonic scale and gourds filled with spider egg sacs for resonance, usually accompanied by a calabash gourd drum which can be played by the gyil performer at the same time or as part of a duo – are a wonder to listen to in their pointillist density, sounding very like several maniac orchestras all belting out dot-by-dot music at the maximum speed possible. Following such maddening music with a mix of hard wooden tones and buzzing tones that, funnily enough, sound a bit like people playing thumb pianos, you can end up in a trance state with your conscious mind amenable to interactions with spirits and denizens of other worlds and dimensions. Incidentally the gyil instrument is the major traditional musical instrument of the Dagara people of northern Ghana and of the Lobi people in Ghana, Burkina Fasso and Côte d’Ivoire. One of the musicians playing on this album is Aaron Bebe Sukura, considered to be a master musician in playing gyil.

The music on this album is continuous and two parallel layers of music – the gyil itself and the rhythmic drumming, itself as much a fast melodic flow of knocking noises as it is in defining the music’s pace and structure – can be clearly heard. In some parts of the recording there is possibly a third layer of music that sounds as if it is playing in a different key and in the middle of the album someone appears banging on a wooden stick which can be a bit annoying. There are voices in the background though I do not know if they happen to be incidental or part of the music. Repetition is constant throughout this apparent non-stop performance, which adds to the trance-like immersive nature of the music. It can be so spellbinding and intense in parts that when the album comes to a close, listeners can feel quite tuckered out!

I wouldn’t say this music is equivalent to an acoustic version of techno as the Sublime Frequencies blurb claims, as the aims of both genres are not necessarily the same though they may strive for a transformation of consciousness on the part of musicians, listeners, dancers and passive participants, and are very speedy, even urgent in their pace. It seems to me that gyil doesn’t seek to be hedonistic in its ultimate intent though it can satisfy such urges if people come to the music purely for self-enjoyment; there may be other purposes the music fulfils as well which may explain how it continues to be the Dagara and Lobi people’s main expression of music culture. Overall the album is a very pleasant and enjoyable music experience.

The album is currently available in digital format with physical copies anticipated to be available for shipping in mid-April 2021.