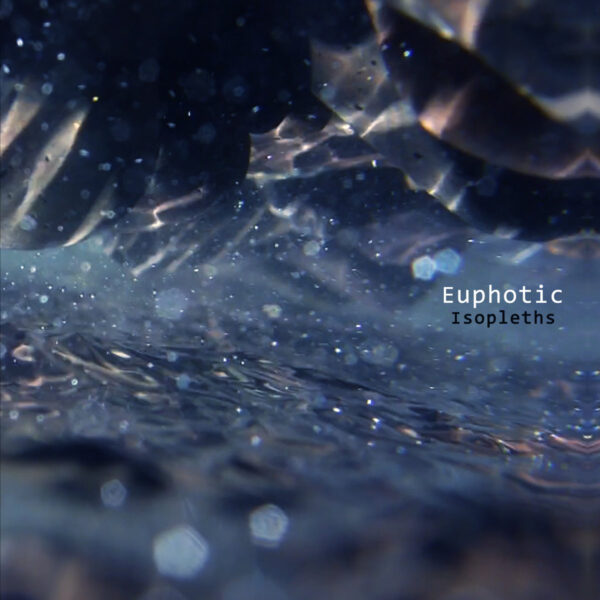 Nice package of three items received from Jacob Heule over there in Oakland CA. This American percussionist has been involved in some exciting and unusual projects as he follows the paths of improvisation and related strands. He happens to run the Humbler label which sent us the Voicehandler record in 2019, although only one of today’s items is on said label. Various aspects of Californian improv and new music are snapshotted in today’s bundle.

Euphotic are an all-American trio who made Isopleths (PUBLIC EYESORE PE 146) in 2018 and 2019. Cheryl Leonard is the Californian lady who collects unusual objects to use as percussion, among them (on this record) pieces of driftwood, stones, shells, bones, feathers, grasses, and such; we heard her on the Isinglass tape from 2016. She’s playing her custom traps accompanied here by Bryan Day and his home-made devices, plus Tom Djill (who played on the odd Pet The Tiger project) the trumpeter who also adds electronics to the set. A not-untypical Public Eyesore release, matching up to that side of the label profile which tends towards formless, junk-esque noise which rambles on for long periods, but there’s a lot of listening pleasure in the rich variety of textures, the extremely non-normal sounds, and the frequent unpredictability of the performances. I especially liked ‘Pluton’ which explodes like a sky-rocket taking off, then fizzles out into scrabbly and uncertain shapes. The group claim to be doing something with “plotted electricity”, which sounds like a useful skill to have in your belt. Tom Djill lives to puff again as he forms one-fourth of the quartet playing on Brittle Feebling (HUMBLER-006), a set from 2018 recorded in Berkeley. Kyle Bruckmann plays oboe and English horn, Jacob Felix Heule plays a single drum, and Kanoko Nishi-Smith joins on the koto. The pieces are titled with brilliant made-up words which indicate a literate hand that is striving for something ever-more descriptive in the slippery world of improv – ‘Milkence’, ‘Sustroon’ and ‘Fraive’ are highly expressive atoms of verbiage, although ‘Uumsol’ scoops the lexical prize. In like manner, cover artist Theresa Currie’s ultra-abstract drawings and splotches are pushing those pools of Indian Ink into places they wouldn’t normally leak. The lovely Kanoko is new to me, although she did play in the ensemble that recorded Horpma in 2011. She is in fact a classically trained pianist who studied at Mills, and finds time to appear in the synth-pop group Cinnamon, and the koto (which she sometimes bows) is her second instrument. Together, these four make a lean and wiry noise, where the writhing semi-musical notes must slug it out with the non-musical events, such as sad groans, dying squeals, and unpleasant rumblings. Actually it’s more of a wrestling match than a boxing match, so you should only tune in if you enjoy mysterious and slow-moving action sports, performed to ceremonial rules that no-one understands. A lot of tension and exciting dynamics at play here. I get the impression this is the first time this quartet configuration has slapped their dolphin fins together, although three of them (sans Djill) made the Mottle tape for Weird Ear as Addleds in 2013. Solo Kyle Bruckmann on the album Triptych (Tautological) (CARRIER RECORDS CARRIER 050) from the excellent Carrier Records. Good to hear again from Carrier, a brand we often associate with exciting and challenging new music from America. Triptych (Tautological) feels very much like a piece of proper composition, even though I sense there’s still the beating heart of free playing lying somewhere at the core of it. Besides Kyle’s oboe and English horn playing, there’s also electronic music, specifically the EMU analog synth which, I am assured, has a certain “vintage” cachet which makes it attractive on a certain level, and this beats is housed at University of California Santa Cruz, which is where the record was made.

Apparently Kyle’s previous record – Dear Everyone from 2017, not heard by us – was quite outgoing and maximal, while by contrast this Triptych (Tautological) is inward-looking and minimal. For the introverted aspect of this theme, Kyle chose to draw three names from the cultural history box as inspiration for the album, i.e. John Barth, Blixa Bargeld, and James Turrell. These seminal creators have all influenced him personally; he’s trying to articulate and restate something, both about their work and about himself, through these musical utterances. Four pieces of astonishingly dense and profound music result – the John Barth one arrives in two versions – with very convincing, thought-through realisations. The composer has added quite detailed and useful annotations in the digipak, indicating not only the rigour of his musical plan, the technical skills required to do it, but also the depth of his cultural perception of these respective creators in the fields of literature, music, and fine art. I feel I’d be out of my depth if I had to hold a conversation with this polymath, but the music he makes here is extremely approachable and accessible. I particularly like the Turrell piece, which aims I think to produce something as immersive and awe-inspiring as one of Turrell’s installations. You may find the Barth works have more immediate appeal, for their sheer complexity and intricate construction. At all times, the wonderful sounds – harmonious blending of instruments with electronic treatments – produces great beauty. A real landmark.