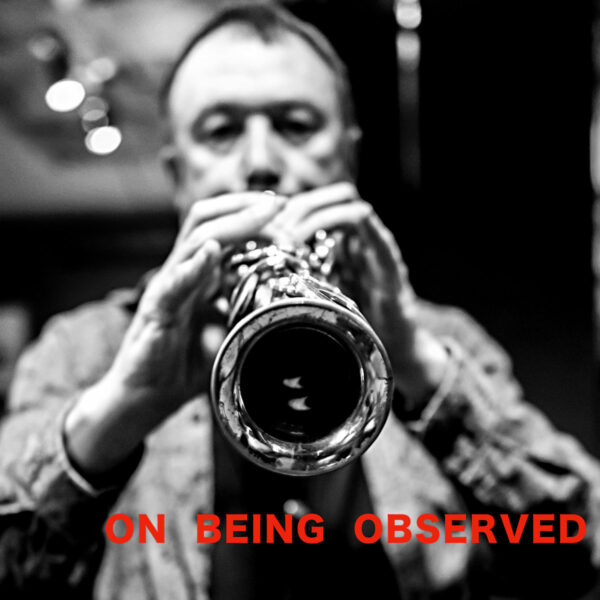 Two new tracts from John Butcher which arrived in July 2020. One title is solo, On Being Observed, and the other in duo, Live In Italy, with “drummophone” inventor Riccardo La Foresta. 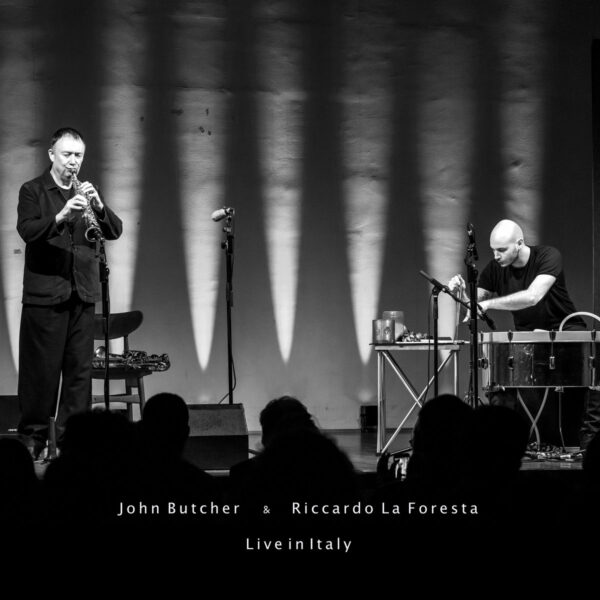 Live In Italy is a document of a visit to Italy by Butcher in March of 2019 comprised of three recordings made at concerts set up by La Foresta at Teatro Torresino in Padova and Dobialab in Staranzano. Here the musicians drub away in seeming competition with each other, Butcher demonstrating his astonishing technique and reactive instant-composition while La Foresta intriguingly produces sometimes drum-like but mostly very un-drum-like utterances from his Drummophone invention. On “Padova II”, La Foresta produces some intriguing chirrupping noises quite unlike anything I’ve heard by means of rubbing or manipulating drum heads before. After perusing his website, I’ve gleaned that it seems La Foresta has spent a fair amount of his time researching ways of looking at percussion instruments afresh, and has settled on a tactic of using drums as “aerophones”, in other words instead of employing the traditional methods of battery to activate them, he considers them as if they were wind instruments; using his own breath and the blowers from organs to produce sound.

“Dobbia” is a lot more relaxed than the agitated Teatro Torresino performances, and probably my favourite. Sound events glide in and out of focus and I get the feeling that the musicians may have deliberately left space to explore the potential of the Drummophone concept. Butcher ramps up the tension in the final third while La Foresta neatly references the fundamental nature of his instrument by producing slow timpani-esque beats to end.

Like most of us I’m sure, it seems John Butcher has been perusing his archives during Lockdown, as On Being Observed, is a grab-bag of live solo recordings from 2000-2006; recordings that didn’t make it onto an actual release. However, these selections are of impeccable quality, and illustrate some of Butcher’s different ways of approaching live solo performance. I’ve had the opportunity to hear him play live a few times; the first at The Chisenhale space in East London back in 2008 and most recently at I’Klektik in Lambeth. I’ve heard rumour that Butcher habitually aims to play somewhere in London every night of the week – if he’s not participating in a jazz session or festival somewhere around the globe – or at least he was pre-Lockdown. This would certainly explain his form, which has been excellent each time I’ve seen him play, and account for his fluidity and openness to pushing the envelope of what we understand by “saxophone free improvisation”.

Two of the pieces included here, “The Glad Roar” and “The Steam Factory”, both take full advantage of the long natural reverberation of the Oberhausen Gazometer in Germany. “The Glad Roar” is a drone-like construction while “The Steam Factory” is a conversation with the space. There’s plenty of natural reverberation and Butcher takes full advantage. His tenor sax tone clusters melt, crumble and fall away in a very satisfying way, particularly at the end of “The Glad Roar”. On “The Steam Factory”, he uses the space’s echo-ey characteristics to build up powerful drones. Both pieces missed inclusion on Butcher’s 2007 album The Geometry of Sentiment on Emanem, but perhaps they benefit from the extension of time as well as space…? “Loose In The Night” is Butcher outside on the street in Rochester New York, either before or after a performance at The Bop Shop record store. Or perhaps it is an impromptu blast after a spot of record shopping.

“Phantasmagoria” is an almost 20 minute recording of a performance at the 2006 Glasgow Jazz Festival. Here he demonstrates all his clear thinking, technical invention and plosive explorations within the context of a melodic approach. Incredibly, around 13:00 his playing sounds to me a little like something you might get from a modular synth, so much so I had to get up and check the sleeve-notes to make sure. “For Derek at 70” was originally destined for a never-released cd planned to commemorate Derek Bailey’s 70th birthday and is the only studio recording here. The sound is clear and natural; you hear the understated characteristics of the room he’s playing in, as well as the noises of the keys and valves of his sax opening and closing. Butcher is close-mic’ed – as you would expect in a recording studio – and recorded in a transparent way, so it feels like the listener is in the room right next to him.

The all-too brief “Cut Me In On The Juicy Stuff” was recorded in the unusual location of Southampton’s 12th Century Castle Vault, (a concert organised by Seth Cooke, I believe), and is an object lesson in the value of the potential of natural reverberation in a unique location over the digital stuff. Although not an immediately “live”-sounding environment, Butcher manages to coax overtones and harmonic feedback out of the space, to great, and curious, effect.