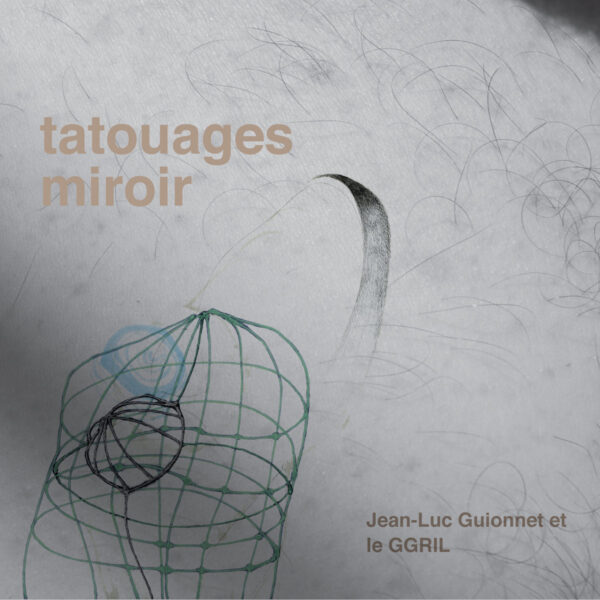 Tatouages Miroir (CIRCUM-DISC microcidi018 / TOUR DE BRAS TDB9046cd) sees two of our fave musical forces joining hands, the French improviser Jean-Luc Guionnet and the Canadian ensemble GGRIL. Guionnet has of late turned in some very interesting exercises in composition, many of them pushing at the envelope of what can feasibly be done with a group of players located in a very specific space – I’ve never quite gotten over the impact of his Distances Ouïes Dites piece, although Quelque Chose Au Milieu also deserves a silver blanquette. I assume he did the composition for today’s record, and he is at pains to explain the process in the notes I have before me. He is using composition to “push the core of the form as far as possible through writing”. He doesn’t see it as an extension of his own playing, nor is a composition an opportunity to disguise a piece of improvisation…and all his effort is directed on “the powers of writing”.

I like the idea that a composition can have so much energy, so much influence, and our French hero is one who uses it judiciously. Because of his interest in pushing musical form to its limits, these Canadian players are pure gold to him…”privileged partners in research and experimentation”, to use his own expression. These players, with their mix of electric and acoustic instruments, may have come together from very assorted and unusual starting points, and are unlikely to be anything like your average classically-trained Ensemble. We heard some superb examples of their unique craft on GGRIL Plays Ingrid Laubrock, where they interpreted the music of this New York powerhouse player, under her direction. That item was a maximal high-energy blarto-beast, whereas Tatouages Miroir is more nuanced, subtle, slower; but still rich in layers, timbres, and remarkable dynamics. At any one time, we seem to be hearing at least two or three concertos played simultaneously; the result is not cacophonous anarchy, but rather represents a living creature pulling in many directions, and we the audience must listen hard to apprehend and appreciate the actions of these writhing tentacles, these pounding hooves, these sharp talons. I seem to be on the edge of describing a musical Hippogriff, a Chimera; not a bad thing to have created at all.

Recorded in Quebec in 2019 and jointly released by the Tour De Bras label, this is a fabulous beast to add to your menagerie. 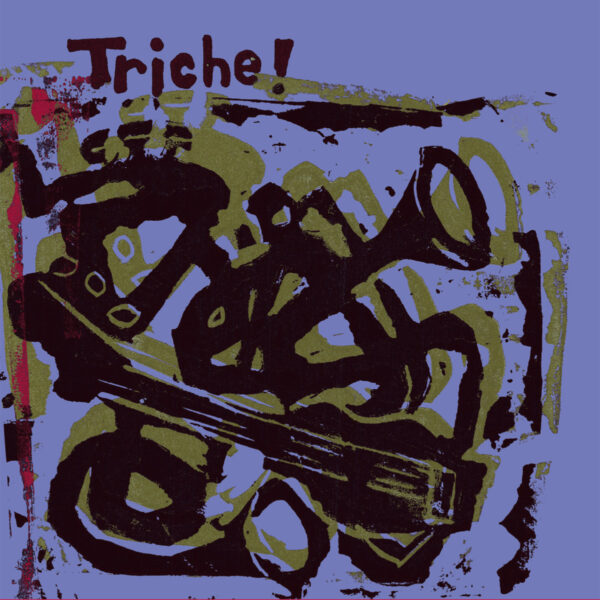 The record Triche! (CIRCUM-DISC microcidi017 / TOUR DE BRAS TDB9045cd) – printed with an exclamation mark on the cover – is the work of a European trio, Matthias Müller, Eric Normand, and Petr Vrba, recorded in 2019 at a studio in Vienna. Vrba is a pretty extreme experimenter who has graced our lobes a couple of times with appearances on the Mikroton label, likewise Éric Normand whose bass guitar caused quite a stir on Not The Music / DO for Tour De Bras. Trombonist Matthias Müller recently surfaced as part of the Ensemble Absolutely Sweet Marie, playing the songs of Bob Dylan. Today’s offering is a strong combination of timbres and sounds, created by the unusual and rather pared-down set-up of trombone, electric bass, and trumpet (although Vrba also adds electronics, sparingly).

The threesome claimed to be open to “all kinds of influences” for this meeting, and the press notes promise us both “minimalist jazz” and “chamber punk”, but for me the main takeaway is a demonstration of techniques rather than a melange of styles and genres. One of the outcomes of this is long periods of nebulous cloud-like utterances floating into the arena, sometimes growing fairly solid and bumping into other clouds, but not quite enough movement or action. Every so often the trio manage to create a meditative groove, with internal rhythms and patterns suggested and sketched rather than stated, which gives the listener a good thinking-cap soundtrack. Mostly, I’m left unengaged and find myself admiring their flexible joints and puffing lungs, rather than enjoying a solid bout with the quavers. If only the actual sounds they make were a bit more interesting, had a shade more depth; a lot of the record has ended up sounding flat and muffled, in spite of having Christoph Amann behind the controls.