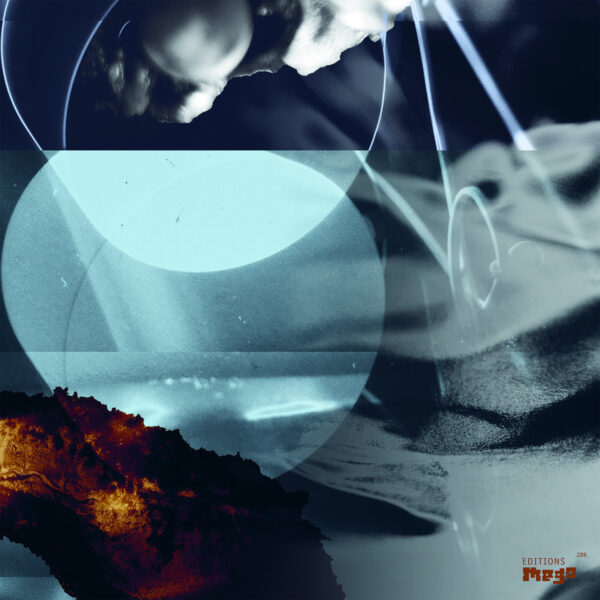 Australian guitarist Julia Reidy here with a new LP for Editions Mego. We first heard her on All Is Ablaze courtesy of Feeding Tube, which was mainly acoustic guitar, and the very experimental cassette Boulder for A Guide To Saints, with its dense mix of guitars, synths, and voices. Today’s item Vanish (EMEGO 288LP) continues that “dense” feeling, as Reidy turns in a highly-produced and layered set, replete with guitars, synths, fuzz effects, field recordings, harmonica and auto-tuned singing voice, on two side-long productions called ‘Clairvoyant’ and ‘Oh Boy’.

The first of these ‘Clairvoyant’ is 18 mins of very ambitious playing and in-studio composing where the guitar is just one of many voices – indeed on several occasions, one almost mistakes it for an all-electronic set of the sort we used to find on Spectrum Spools, that sub-label of Mego that specialised in cosmic and melodic synth works. This whole ‘Clairvoyant’ thing is beautiful music, yet also has a rather steely edge that makes it seem like a dramatic piece of “symphonic” prog, with borrowed rags from the high altars of Florian Fricke and Klaus Schulze, updated for today’s audience with concision, modernist sounds, unexpected twists. While it may meander in places, there’s a strong conviction to the performances here, and the way the musician sizes everything up in her hands, every element placed to maximal effect, with clever combinations of music, effects, and treatments. Might one dare to suggest she’s approaching the sort of turf currently occupied by Oren Ambarchi, with his lengthy composed and layered guitar excursions?

‘Oh Boy’ continues this semi-composed approach, though teeters slightly towards pop music with its treated vocals, almost becoming an actual song halfway through, although Reidy studiously avoids resolving form into anything so rigid as a predictable structure, preferring instead this continual flow of musical episodes which blur their edges and form satisfying, if slightly nebulous, patterns. Up to now I might have missed the most obvious point, that Vanish is just about her most accessible and altruistic record to date, and may even convert a few more partisans to the cause of experimental music. From 18th August 2020.