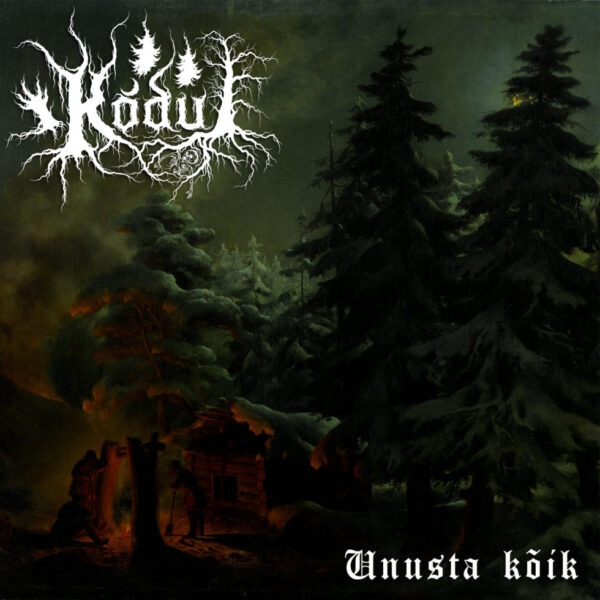 Kõdu is a recent black metal band formed in Tallinn in 2018 by multi-instrumentalist Kõdu and vocalist Count Vincent von Arckharum. In 2020 the band added two more Estonian musicians KuradiSiim (bass) and Inferator (drums) and Italian migrant Samantha Surmatalv (rhythm guitar) and put out debut album “Unusta kõik” in early 2021. The album’s themes revolve around nature and humans’ relation with it, and the nature-based beliefs of the Finnic peoples living in Estonia before their forced conversion to Christianity during the Livonian Crusade in the 1200s. Some of the album’s lyrics draw inspiration from Estonian writers such as Juhan Liiv (1864 – 1913), regarded as one of his nation’s greatest prose writers and poets, and Ilmar Särg. With the album’s title translating (via Google) into English as “Forget everything” and considered together with its themes, we might guess that the album’s ultimate message is that in reconnecting with nature, we need to give up those ideologies and beliefs that disconnected us from the natural world and our own humanity in the first place and which now threaten the planet’s survival as well as our own, and to approach nature with open hearts and minds as young children might do.

Opener “Sügispime” introduces the band with a raw melodic and thrashy style, with an emphasis on jangly dissonant guitar chords that bring with them a dark atmosphere. Von Arckharum’s vocal style is very gravelly and almost skeletal but the clean production puts it upfront. As the album continues, in tracks like “Aheldatud klaasi” and “Kaotsin”, the atmosphere darkens even more and the music often assumes a jazzy or dark blues influence that reminds me of 1990s-era Norwegian avantgarde BM band Ved Buens Ende. Song structures can be complex and the music takes frequent unexpected turns guaranteed to make listeners feel a bit disoriented, even in short tracks like “Aeg”. Those solo lead guitar breaks may not be long but listeners may need a couch, a glass of water and nausea tablets close by. Kõdu’s inventive nature and their music’s unexpected twists culminate in final track “Laotus”, featuring a solo cello melody in its introduction, plenty of seesawing riffs, jangling tremolo melodies and death-rattle groans, and a bleached-out lead guitar solo trailing it all.

The clear production gives the music a very angular and spiky edge, and the spaces within the music are dark and bleak. The emphasis on complex song structures along with the dissonant guitar chords and the clean production demands a high level of musicianship and the musicians working together as a tight unit, both of which are present and consistent throughout the album. After hearing the album a few times, my impression is earlier tracks like “Aheldatud klaasi” and “Kaotsin” are better than the album’s second half; while later songs like “Kui minna suurele teele” do expand the music’s range, the novelty of the music’s twangy sound has dissipated by then and these tracks seem to be biding their time for the final song to give the album its huge climax.

With the distinct style they have, incorporating death metal and classical music influences, and their serious and thoughtful approach to song composition and performance, Kõdu deserve the attention their debut album has attracted so far from Nigredo Records. Their future studio endeavours should be worth looking out for and I imagine expectations will run high that their second album will be of the same standard as their debut.