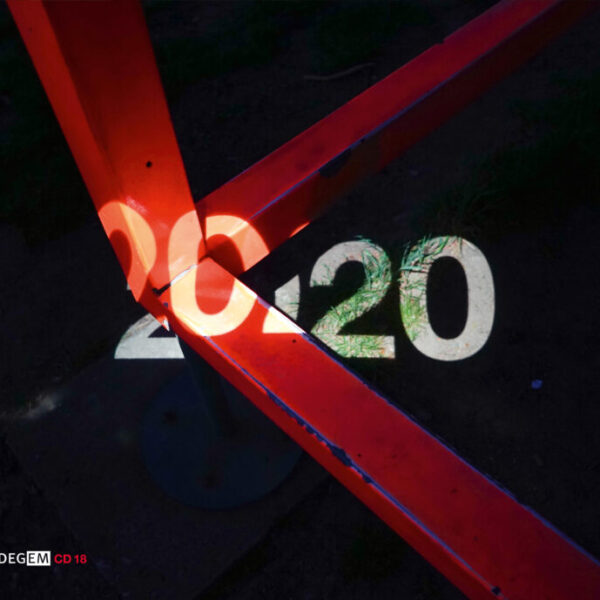 The album 20_20 (EDITION DEGEM DEGEM CD 18) is a compilation of 15 contemporary sound artists, it’s curated by Stefan Fricke, and the theme is the year 2020. It’s all about the year of the COVID-19 virus, but specifically about the “fears, worries and panic” of the general populace, and the general failure of political solutions at this time. The sound works depict a “network of situations”, and attempts to comment on these situations. There is an element of protest, even of intervention, and the album proposes every state of possible emotional reaction from rage to despair to cautious optimism. Each contributing artists supplies – in German and English – a short paragraph of contextual information, each one a concise and dense packet of ideas explaining the semi-conceptual framework of their statement. Some of them play games with numbers, building abstruse symmetrical patterns from the digits two and zero, while some link their sound art directly to very specific political or historical agencies. The music itself – a mix of electronic drone and vague field recordings – is largely rather undistinguished, and far from projecting an “emotional” response, it emerges as very arid and uncertain, an intellectual rather than a visceral response. It’s true that “2020 was a dramatic year” as the press notes kindly inform us, yet this cold album expresses very little of that drama. O Yuki Conjugate are the English duo of Horberry and Hulme who have been active since the 1980s and notched up a modest discography and probably quite a strong following in that time. I tend, unfairly perhaps, to file their brand of ambient drone alongside Zoviet France and Rapoon, though their music is somewhat more accessible; on this record, Sleepwalker (AUF ABWEGEN aatp69), you will find user-friendly beats, not-unpleasant melodic elements, and general good vibes exuding from the polished ambient drones. This is their first “new” album in almost ten years; the last thing we heard from them, the 2017 Tropic album, was a selection from their mid-1990s output. The music on Sleepwalker was explicitly composed to be used as a soundtrack to a film of this name made by Andrew Hulme, and in fact the CD is drawn from live performances of this son et lumiere event when they toured it across Europe. I expect hard-core followers of the Yukesters will already know all this, but for non-initiates this represents your first chance to hear these evocative and mysterious tracks. If you missed the film, there’s a full-colour booklet inserted with plenty of smudgy and vague images, plus solemn texts inscribed by Hulme. There’s also a colour photo of the duo at work on stage, and much to my surprise they seem to be doing it using an electric guitar and an electric bass (plus mixing desks, of course). Hearing these highly-processed and delicate sounds, I would never have guessed. Paul Schütze is the Australian composer whom I recall hearing on his 1995 album Apart, which got a Virgin records release and is forever linked in my mind with the discovery (by this listener) of the new strains of ambient music around that time, starting with the excellent Isolation compilation put together by Kevin Martin. It’s probably wrong to label Schütze with such a tag, as he comes from a background in “industrial” music in his home country, and has absorbed a lot of music from “ancient cultures” probably more effectively than any given techno-raver type who applies the “tribal” tag to their beats. Plus Schütze has done cinema soundtracks. Today’s record Without Thought (AUF ABWEGEN aatp 77) – the title printed backwards on the cover – is part of a much larger sound installation, one which used projected films as well as sound and “stereo fragrance”, whatever that may be, and he did it in London in 2018. There’s a complicated diagram printed inside the CD which may represent the structure or array for this piece, and it involved the playing of three other musicians – the Sho of Ko Ishikawa, the guitars of Daniel Pennie, and the electric cello of Raoul Bjorkenheim, who joined Schütze with his electronics set-up.

The work is intended to be “anti-narrative”. I never realised this, but Schütze eschews story-telling in his art and probably wants the rest of us to stop telling stories too; he feels we’re “emboss[ing] meaning onto the surfaces of life”. He has carried this philosophy forward in his work for 40 years. Accordingly, Without Thought is about as devoid of content as you can get, consisting of delicate and near-empty sounds played with superhuman restraint by the team of creators, all blending their musical personalities into a vague cosmic gene pool. They do this for over an hour and not only retain their pose, they nearly defy gravity with their nuanced playing. Impressively, Schütze does this in a highly original manner, without once bringing to mind the schematic formulas of the American minimalists, nor the enforced rigidities of the Wandelweiser school.