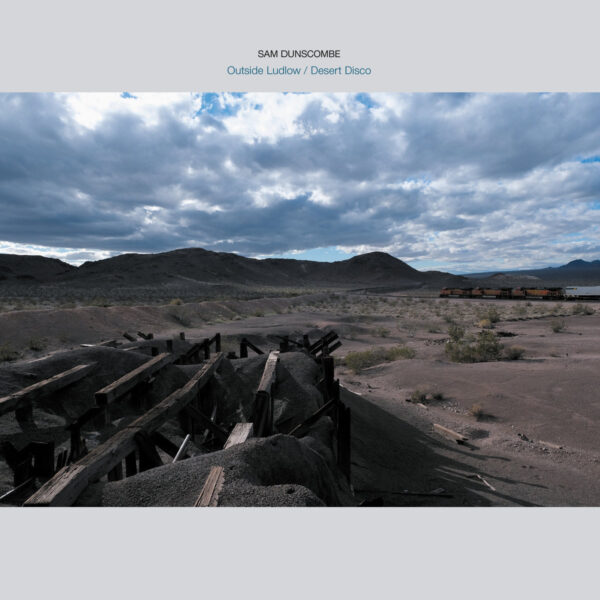 Camping in the Mojave Desert outside the ghost town of Ludlow on the historic Route 66 Highway and finding a tangle of old quarter-inch reel-to-reel tape stuck on a cactus would appear to be the oddest inspiration and source of material for your debut solo album. Not when you happen to be clarinettist / electronicist Sam Dunscombe who comes with an impressively eclectic history: among other things, performing with Berlin-based Harmonic Space Orchestra, working with James Rushford and Judith Hamann in the project Golden Fur, and being the official archivist for the estate of Romanian-French composer Horatiu Radulescu (1942 – 2008) whose works in spectral music Dunscombe is also committed to performing. Dunscombe uses a digitised version of the old tape, along with transcribing its material and adding to that material on Hammond organ, as one of the main parts of the track “Outside Ludlow” on this vinyl LP release from Oren Ambarchi’s Black Truffle Records.

As befits Ludlow’s current ghost town existence, “Outside Ludlow” is an eerie work of field recordings of desert silence, insect noise and sparse birdsong punctuated by passing traffic on Route 66, clusters of gold mine explosions and local marine corps activity (the other major part of the track) that slowly grows and envelops your head and consciousness. In this strangely bubbling environment, in which helicopter-like sounds pass by like ominous droning flotsam, shrill piercing shafts of radiant-white drone cut through the space between your ears and harsh scraping, grinding circular noise and Hammond organ sighing follow and fill up the sheared voids. Your mind will certainly feel strangely cleansed of whatever trifles blocked it up before!

“Desert Disco” is an electronic sonic exploration structured around a fragment of the tape found in the cactus: it’s a much more ghostly ambient work, expanding like pulsing waves from a central point and penetrating all the little nooks and niches you never knew your brain had – until now. At once delicate and fragile, yet well-defined in its rhythms and very focused, this track has a hypnotic, even magical quality.

From apparent trash, both physically and perhaps in concept – track title “Desert Disco” gives some indication of the, uh, past glories that reel-to-reel tape must have held and the glittering dance clubs where it was played before being ungraciously jettisoned and ending up spiked on the cactus not far from an equally abandoned town – Dunscombe has crafted two works of mesmeric and haunting ambient beauty that hearken back to their source and look forward to transformation and rebirth.