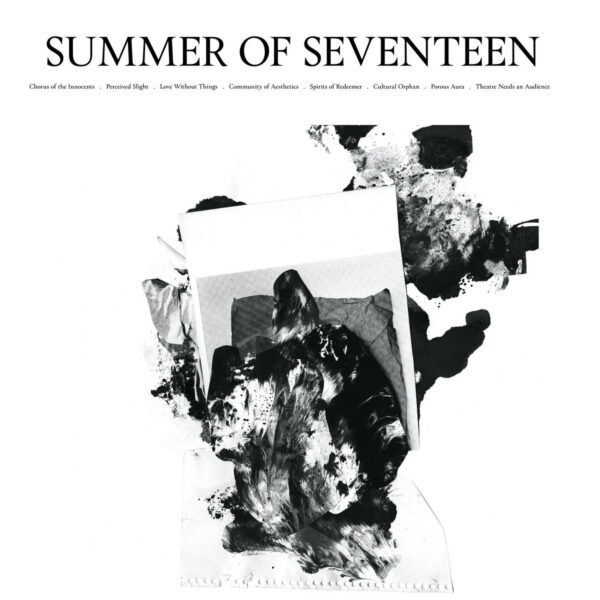 Summer of Seventeen with their self-titled record (KR081) on Karl Records…this appears to be an American “supergroup” of avant-gardish players, led by Monika Khot who did the editing and arranging. I never heard Khot’s music before, but she’s been appearing solo as Nordra for a number of years (an act which may shade into dark ambient and coldwave with its treated guitars) and also is part of Zen Mother. Joining this Seattle musician are Daniel Menche, Faith Coloccia, Aaron Turner, and William Fowler Collins; Menche is known to us for his abrasive noise releases, and Aaron Turner is the hardcore hero behind Isis, Old Man Gloom and Sumac, besides running the Hydra Head and SIGE labels. Today’s record, comprising eight vague and unsettling instrumental pieces, appears to be linked to a fiery disaster in the state of Washington, when wildfires blighted the months of August and September in the year 2017. Since Khot and company made these recordings shortly before the toxic smoke began spreading, they can’t help but notice the deeply pessimistic tone of their music and are thus credited with having had a “premonition” of the conflagration. Might not be much conventional pleasure in hearing these discordant, meandering moans, although the overall processed heat-haze guitar sound is mesmeric. From 19th October 2020. Another Vidna Obmana item from Zoharum in Poland, the latest in a string of reissues which recently included the team-up with David Lee Myers, Tracers. Today’s item is another reissue, The Shape Of Solitude (ZOHAR 211-2) which originally appeared in 1999 on the Swedish label Multimood Records at a time when the Staalplaat distribution chain was flooding the continent with ambient CDs, now here with a 2020 remaster by the creator himself, and with the blurry moody black-and-white photography which links the records in this reissue programme visually. For this Solitude item, our man Vidna roped in the Belgian guitarist Serge Devadder, who had previously made a record with Patrick Goethals of Amber. This particular set has been received as an “expansion” of the ambient genre, by dint of including melodic elements from the guitarist, and also perceived as being “nearer the realm of the avant-garde”; either interpretation tends to cast Vidna Ombana as one who constantly strives for new and improved experiments. I tend to struggle with most of his music – unfortunately, I find it samey, lacking in weight, and overly-processed – but I accept that the studio processing is how Obmana achieves most of his results. It’s notable on this release that the guitar work of Devadder – already pretty alien-sounding when it comes out of the gate – has been further transmogrified and sculpted by the interventions of Vidna. While the first tracks didn’t do much to excite me with their banal melodies, matters improved somewhat around tracks four and five. Both ‘Perceptual Edge’ and ‘A Stinging Memory of Shared Skin’ start to ditch the guitar melody in favour of more pure, abstract sound, and a successful blend is achieved. The “solitude” theme also starts to hit home by this point, and more than once you will find it easy to conjure up the image of a wan figure gazing into a mirror as their mind starts to unravel from loneliness. At the same time, the faded romanticism of this looped and processed music suggests that an introverted narcissism might be a more appropriate subtext. From 7th December 2020. Trio Pipeline from Italy play Kakuan Suite (WE INSIST! RECORDS LPWEIN11), a set of 10 compositions within a programme composed by the clarinet player Giancarlo Nino Locatelli, performed by him with the help of Andrea Grossi on double bass and Cristiano Calcagnile on drums and percussion. Is it jazz? It starts out more or less in the mode of very accessible and melodic tunes with much swing feeling, somewhat in a post hard bop mode, although only ten minutes in and the trio find themselves engaged with more abstract shuffling, rumbling and tootling noise-making of an acoustic strain. These changes are indicative of the story Giancarlo is attempting to tell, a sequence in ten stages (or nine, with one repeat, to be pedantic about it), which is something to do with bulls…he tells a short nonsense story in three paragraphs, built around anagrams of the word ‘tori’ (= bull), that allows him to include incongruous objects such as vegetable gardens (orti) and round chapati breads (roti). This conceit extends onto the cover artwork, with its playful drawings of bulls doing various cute things. At the same time, our man wants to invoke movement and dance, claiming that his compositional form is “suggested by the movement of the hands in relation to the instrument, the fingers on the clarinet keys”. Well yes, but couldn’t this be said of any artist who has played a woodwind instrument in a jazz context? This quibble aside, Kakuan Suite has a certain charm and elegance overall, and there’s a lot to be said for the unassuming approach of this pared-down, all-acoustic trio playing. (01/12/2020)