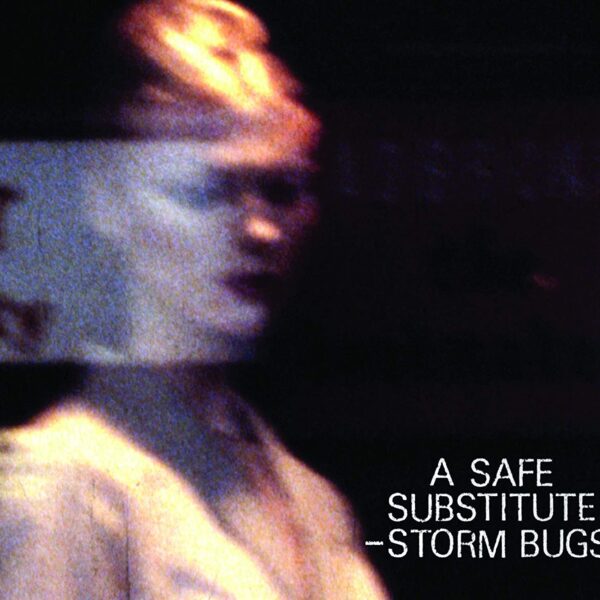 Storm Bugs here with a handsome-looking reissue / repackage / remaster of A Safe Substitute (KLANGGALERIE gg 337)…this originally came out in 1980 as a cassette on the Snatch Tapes label, then was reissued in 2011 on the UK Harbinger Sound label. That red vinyl edition was taken directly from the cassette as apparently the original source materials (on reel-to-reel tape, natch) were lost in 1990. This state of affairs doesn’t seem to have adversely affected today’s reissue, however. It’s encouraging to see it on Klanggalerie, Walter Robotka’s Austrian label which has for over 20 years been reissuing some real “classics” from the international scenes of industrial weirdness and electronic alienation, and more recently offering a home for the works of Hardy Fox of The Residents.

Storm Bugs fit in well with this catalogue, arguably. Featuring the core duo Philip Sanderson and Steven Ball with guest player Sarah Pomeroy, the music here was made with the VCS3 synthi, tape recorders, radios, guitars, vocals, and percussion, all assembled into strange, unusual and somewhat bleak vistas; even after many years of hearing these fave tunes, I still never quite get used to them, and they seem to convey half-stories in dreamlike fashion, using surreal blurry images. The results, and the techniques, no doubt emerge from the interest in experimental cinema which both Sanderson and Ball share, and I would argue that few UK musicians have come closer to delivering sound work that is analogous to some of the output of the Structuralist-Materialists. In particular, there’s the same concern with tape as material, not unlike the materialist practice of some of the hard-core Film-Maker’s Co-Op brigade; Storm Bugs call attention to the properties of magnetic tape, and the devices used in the process of assembly – including loops, varispeed, edits, and processing. You may want to liken them to tape-wranglers of the Schaeffer school, but Storm Bugs have the advantage of growing up in 1960s and 1970s UK, absorbing and advancing the post-punk thirst for experimentation in rock music. They came up with their own unique hybrid, is what I’m trying to say; they didn’t completely abandon song form, or rhythm; at the same time, they didn’t produce harsh noise for its own sake.

All of this radicalism, I would argue, continues to carry an edge, can still matter in today’s polymorphous culture, and the cold photocopied brutalist greyness of these 1980 experiments will still resonate. Side A of the original cassette, originally three tracks (four on the LP) is now presented as a single suite – ‘Mesh of Wire’ through ‘Objective’ to ‘Car Situations’ to the reprise, 16:36 mins of delirious creepoid tape collage, where the voice reciting “take a child on holiday” still causes goosebumps with its surreal incongruity (100 miles better than any given NWW LP). ‘Hodge’ and ‘Solely From’ lack the voice and collage elements and feature some demented synth sequencing that is genuinely strange and troubling, a distorted and more febrile take on the early experiments of Conrad Schnitzler. Featured on this reissue are three “bonus tracks” – an extra 13 minutes from this period that are most welcome. ‘He Rose Up Again’ is a cryptic wave of chill from the tomb which reminds me of the Two Daughters LP; it has that same sense of faded horror, a supernatural meeting at twilight. ‘333’ – the only track here credited to both creators (the remainder are composed by Sanderson) appears to contain traces of a live performance, percussion and guitar (?) swathed in echo and tape wobble doing battle with non-natural synth sounds on an arena strewn with rubble and fragments. ‘Table Matters Soundtrack’ may or may not have appeared on their 1980 EP by this name (Loop Records LOOP 323), but it’s a tiny gem of construction; echo chamber percussive sounds, evil synth tones, colliding loops forming a carefully-controlled chaos, while somewhere in the murky background, desperate voices of lost souls continue to wail.

Lastly, there’s the new cover art; across three panels of the digipak, we have stills taken from the Table Matters movie filmed on Super 8mm by Storm Bugs, also of 1980 vintage. The CD artwork reproduces the original lettering from the cassette too. A real gem – required purchase for any serious student of 1980s post-punk, industrial music, cassette culture, and DIY experimental genius. Arrived November 2020.