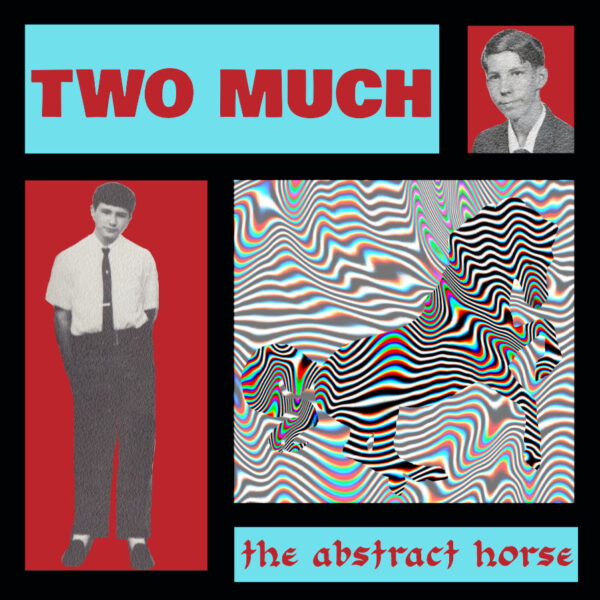 Curious item is The Abstract Horse (FEEDING TUBE RECORDS FTR494) by Two Much – the sound of two very young American teens rocking it up in their parent’s living room in Orlando in the year 1968.

The duo is Robin Amos (drums) and his friend John Chadwick on guitar. Robin Amos was a member of The Girls, a New Wave combo who in 1979 had the rare distinction of releasing a single for the famed Hearthan label, produced by David Thomas and recorded by Pere Ubu’s engineer Ken Hamann. They never made any albums after that as far as I know, but Amos was also in Cul De Sac, a Boston band who made a number of albums through the 1990s. John Chadwick doesn’t appear to have followed a career in music, however, and the duo Two Much appear only to have flourished on this single session recorded at home by Robin’s father; soon after this Chadwick moved to California and the friends drifted out of touch.

The Abstract Horse has much to recommend it if you can put up with the DIY recording quality and the limited range of our two young heroes, whose voices and monotonous guitar strums get a bit grating after a while, but that’s not really the point. They perform with conviction and honesty. I think the main point of interest is the songwriting, and there are indeed some unusual lyrics and unconventional verse-chorus constructions going on here, especially noteworthy when you consider that they were written over a two-year period starting when Robin was 12 years old (and Andrew was just 10!). You have to strain a bit to decipher these odd lyrics, but there’s nuggets of inspiration cached in these nasal mumbles. However, it’s not quite the “primitive and ecstatic teenage garage rock explosion” that the press notes promise; that’s the kind of description one usually applies to the thousands of suburban and small-town punk bands that sprang up in garages across the USA in the wake of the Rolling Stones and the Beatles, producing obscure 45s which started to appear on the Pebbles comps, then Back From The Grave, and many other similar reissue programs. Two Much don’t have that same snotty, pent-up energy, no seething sexual frustration, nor embittered teen angst in their blood, and instead emerge from this tape with something much more like amateurish art music, slightly left of centre.

Even so, I can see why the label elected to press up 200 copies of this off-beat item, and as teenage talent shows go I’d much rather have this LP than the narcissistic showbiz wannabes who appear on The X Factor and similar shows. From 16th October 2020.