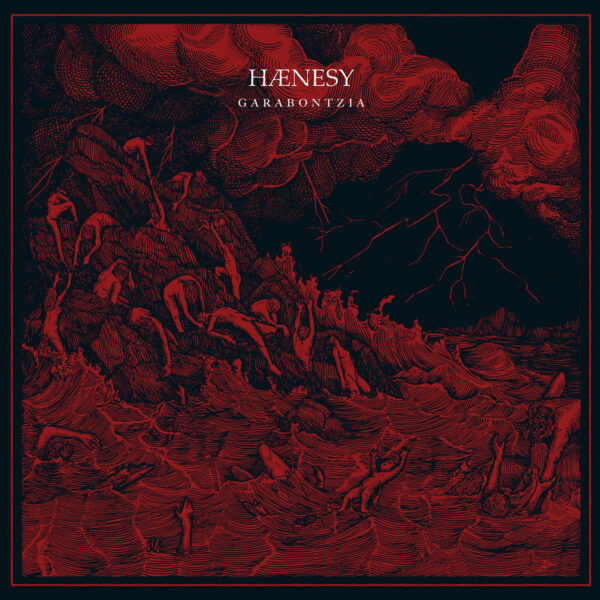 A three-piece atmospheric BM band from Budapest, Haenesy plays a style of music with a strong emphasis on atmosphere and emotion, the result being music that seems more akin to ambient mood music or soundtrack than to song-based genres. Formed in 2017, Haenesy put out a tape, an album and a split recording with Russian band Moondweller in the space of two years. I must admit when I first heard the split with Moondweller, I wasn’t all that impressed with Haenesy’s side: the music was decent enough melodic blackgaze with a lot of cold ambient shadow-cloud atmosphere and plenty of growling vocals but it was too busy and a really dicky sound was present that had a flattening effect on the music. After the split release, Haenesy went into hiatus for two years, the next major work “Garabontzia” coming out in early 2021.

The musicians obviously worked hard refining the Haenesy style and sound as the music relies less on ambient effects and more on melody and inherent emotion. The sound seems richer and the mood in songs more heartfelt. The use of live drums gives the music energy and passion, and the contrast between the blast-beat percussion and screaming droning guitars in the background brings depth to the music that enhances the overall sense of drowning or being immersed in and caressed by a current that takes you away wherever it will. The guitars alternate between tremolo BM drone and clean-toned; when they are clean, their sound is melancholy yet darkly bewitching and not a little dreamy, holding this listener spellbound at times and wondering where the melody will go next.

The album is very consistent throughout in its sound and mood, and songs – or rather, moody soundscape pieces of short to moderate length with a beginning and an end – distinguish themselves by their melodies and riffs. An early highlight is “Path to the Weeping Willow” for its distinct melodies, made even more so by reverb which give them a lush, radiant sound, and for moments of ringing tone, hushed whisper and raspy sighing vocals. The following song “Létrontás” is a slow and steady burner in depressive mood mixing violin and other acoustic strings with a spoken-word Hungarian-language monologue by guest Martón Attila Farkas that sounds as if it might be telling a tale with a sting or a moral at the end. Closing track “Asphyxia” carries the drowning theme to its logical end with complex arrangements, building riff upon riff, mood upon mood, speeding up and increasing the tension towards a climax that leaves listeners devastated, alone and abandoned, and sure to want to return to the magical world that enveloped and charmed them.

Parts of the album could have been edited for length and the songs between “Létrontás” and “Asphyxia” seem a bit ordinary after the music that’s gone before them. Probably at this point in the album the music could have taken a detour into another part of its dream world by going into a different key or introducing a new instrument that changes the music’s sound. The one thing listeners will definitely take away from this album though is its unforgettable and distinctive sound universe: it’s a beautifully hypnotic dimension, sad and even tragic though it turns out to be.