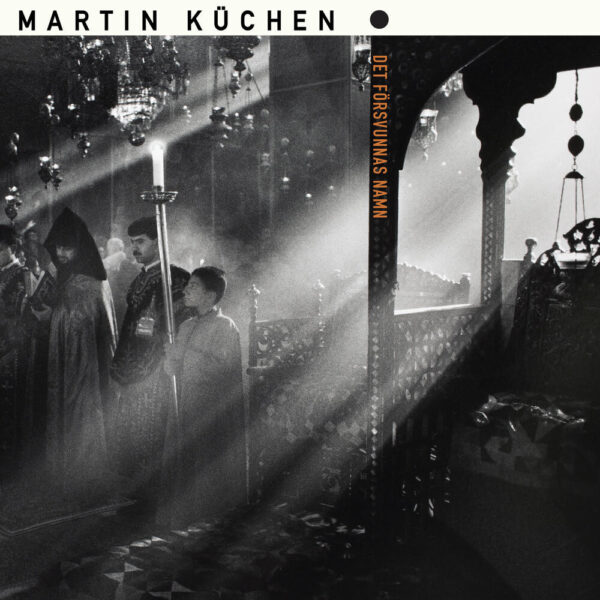 Latest solo release from the very capable and diverse sax player Martin Küchen is called Det Försvunnas Namn (THANATOSIS PRODUKTION THTLP3), a title which translates as “The Name Disappears”, or as he has it on the back cover “The Name Of That Which Is Lost”. Recorded in a church in Sweden, this is largely a set of short-ish and enigmatic sax performances, the composer-player trying out a wide variety of techniques and recording methods, sometimes somewhat muffled or treated with light studio processing, producing quite abstract and odd music with a vague yearning emotion, a tinge of strange sadness.

One thing he does is insert speakers into his saxophone, out of which extra source music (Vivaldi) sometimes appears. On two tracks, he samples Chris Watson – pulling in field recordings that were originally released on Outside the Circle of Fire, most noticeably on ‘Hippopotami Mit Mensch’, a track which might enjoy the distinction of being the first time an improvising sax player has accompanied a wild grunting beast. The hippo comes off better – our Swede is too diffident to gainsay those naturalistic barks. Some standouts: ‘Wasser Toten, Luft Toten’ which is an agitated scrubble of a piece which sounds more like 27,000 rubber balls falling downstairs – hard to believe a mouthpiece and a hunk of metal can produce such audio oddness. ‘Unexit Here’ – a very fine minimal heave-ho where saxoid whimpers and squeaks rub up against a deep percussive rumble like someone scraping the skin of a timpani. ‘Ditt Öga I Mitt Öga Sluter Sitt Stjärnvalv’ – a gorgeous miniature which has the ghost of a classical music sample (or church music?) floating in the far background in stately fashion, while Küchen plays a mangled tune that’s almost comic in its twisted emotional range. The opening track on side A – which is like our man attempting to recreate the entire No Pussyfooting album with his sax – loops and drones and mesmerising repeats, and it bucks the trend of the album with its long duration at 10:24 and its dignified, chastened demeanour.

Oddest of all – this entire record is obstinate, a riddle without a solution – is ‘The 5th Of December 1931 02.00 AM’ which closes the album; we’re informed that it’s ‘based on the first part of the sarabande from Bach’s Cello Suite II’, and while you can make out the skeleton of a Bach-like structure in the top-line of the sax solo, the stroke of genius has been to combine it with a raga-like string drone and some unintelligible voice samples – apparently the voice of Trotsky, though you can’t really tell – murmuring the secret of life to an audience of spectral listeners. Add to all these puzzles the cover photograph, which might be depicting a resplendent moment from High Mass in an Orthodox church in Turkey of Greece. The record is intended as the last part of a trilogy which includes the records Hellstorm and Lieber Heiland, Lass Uns Sterben. From 19th October 2020.