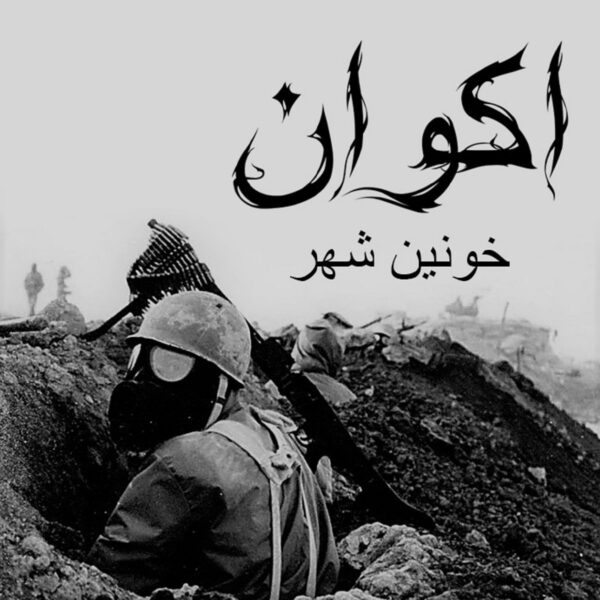 Dedicated to the Iranian soldiers who fought and died in the Iran-Iraq Gulf War (1980 – 1988) and also to the civilians who lost their lives in that war – and especially the Kurdish victims killed by chemical weapons used by Iraqi forces in the village of Halabja in March 1988 – Akvan’s “City of Blood” EP is a very stirring and emotional work. The solo project of Tehran-based Visareza, Akvan combines raw melodic BM with melodies played on the taar, a traditional Persian four-stringed lute used in Central Asia and the Caucasus mountain region. Adding the taar to otherwise thrashy and aggressive raw BM gives that genre a darkly sinister air, with the dissonant quarter-tones the taar emphasises. Gravelly vocals and a cold clear production bring other levels of sonic contrast to the liquid tones of the taar and the grinding abrasion of the guitars.

The EP’s title is derived from a poem “A Poem for War” by Iranian writer Qeysar Aminpour (1959 – 2007). Three of the four tracks are as raw and pained as can be, the taar casting an almost monstrous black shadow over the grinding music and Visareza’s bleedingly raspy vocals ranting and raving competing with the taar for dominance over the BM guitars. The guitars and taar either trade riffs or run note for note in parallel, and some of these riffs (but not all) can be distinctive and memorable. Of the three BM tracks, “Hidden Wounds” features music that can really send tingles up and down the spine as guitars and taar race each other while percussion bangs away. Aggression, anger and defiance are present in spades but there is also a creepy feeling in the taar’s tones. “Halabja”, for all its sorrow, melancholy and drama, seems a lesser track compared to “Vanquish All” and “Hidden Wounds”: it hammers away in anger at the indifference of the outside world to the suffering Halabja victims but as the closing track on the EP, it is short on demonstrating the determination and the success of the Iranians in pushing back the Iraqi attacks and preserving their nation’s territory even though technically Iran lost the war.

“In Narrow Graves”, referencing again “A Poem for War”, is an entirely instrumental acoustic piece meditating on death and the sorrows, hardships and chaos of war for ordinary people, soldiers and civilians alike, caught between the machinations of opposed politicians and the foreign governments who may be pulling their strings. This is a very emotional and moving track, and it’ll stick out the most for many listeners as it’s so different from the rest of the EP in mood and style yet gives it the depth and emotion it needs.

This is a good EP, filled with righteous anger against war and the havoc it creates, but I can’t help but feel it could be longer, with maybe a fifth song that could close off “City of Blood” with a vow and a message perhaps to all of us to work towards ending all wars forever, and let “Halabja” be a memorial to the Halabja victims. The music is something to be savoured over and over with its rich contrasts of tone and texture as well. I just think also the EP’s theme of the Iran-Iraq Gulf War and the suffering and sacrifices that Iranians had to endure and make merit a full-length album treatment. This may be something that Visareza could work on if he isn’t working on it already.

The EP will be available on vinyl through Subsound Records in July and on cassette through Snow Wolf Records in August.