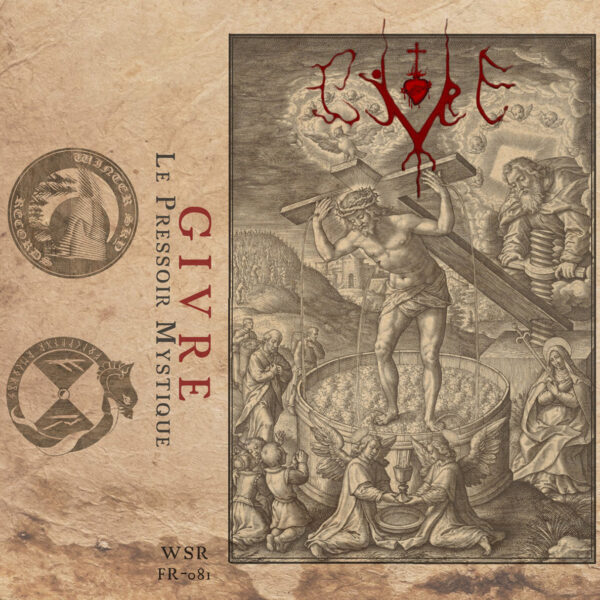 Translated into English as “Christ in the Wine Press”, this album’s title refers to a Christian mediaeval visual motif of Jesus standing in a wine press as a metaphor for his crucifixion and the sacrifice it represents: Christ being God made flesh, and His body pressed into the bread and wine of Holy Communion. Accordingly this image is the inspiration for Quebecois BM band Givre’s investigation into those aspects of Christian and mediaeval history, folklore and traditions that impress the Givre men as being “metal” and “black metal” in particular.

From the first proper BM track “Rebatons notre chair vilainn”, this is a very uncommon recording of raw black metal and equally raw, almost frightful emotion in an atmosphere of cloistered monastic isolation suggestive of extreme religious fervour in a context perhaps of social and political upheaval caused in part by plague. (Parallels can be drawn between our current world in the midst of an ongoing pandemic and the political and cultural changes following in its wake with the world the Givre men recreate on this recording.) The music is unforgettable – indeed you’ll probably curse yourself that you ever came across this recording because the pained depressive riffs and the agonised screams keep playing over and over in your brain, including during times when you least want them to. “Blanche biche” continues the dark, almost unspeakable misery and agony with highly atmospheric if oppressive music and the continuing tormented screaming. The chanting sounds as if it’s coming from a frenzied crowd on the hunt for a sacrificial victim to lynch and the howling guitars are egging the thugs on. (The song is actually a traditional work from 16th-century western France.)

From then on, the next couple of songs are poems by Venetian-born French court writer Christine de Pizan (1364 – 1430) set to depressive BM grind music. No matter that the lyrics are in French, the music is pained and incredibly harrowing, and deeply affecting even in the spaces behind the guitars where a space ambient effect falls steadily and disappears into the darkness. Closing track “Adieu ces bons vins de Lannoys” is another mediaeval French work set to noisy soul-rending raw BM, this time from Guillaume de Machaut (1300 – 1377) who lived through the Black Plague (1347 – 1350): the song is about retiring from the world of material pleasures and cares to live in solitude.

The music throughout the album has a distinctive melodic twang, no doubt influenced by the provenance of the poems it accompanies. The album’s theme of the darkness, trauma and corruption that are threaded through mediaeval Christianity and their effects on people in Europe, and the fanaticism, persecutions and genocide that resulted, informs the often suffocating atmosphere on the songs. What also lifts the album to a level where it has the potential to be a slow-burning cult classic in years to come is its extreme passion and a clean production that puts everything here – the emotion, the melodies, the music’s texture – in a stark space where pain is in full display and nothing is hidden.

The album will be available in a physical format (cassette?) to American TSP fans through Folkvangr Records in August 2021.