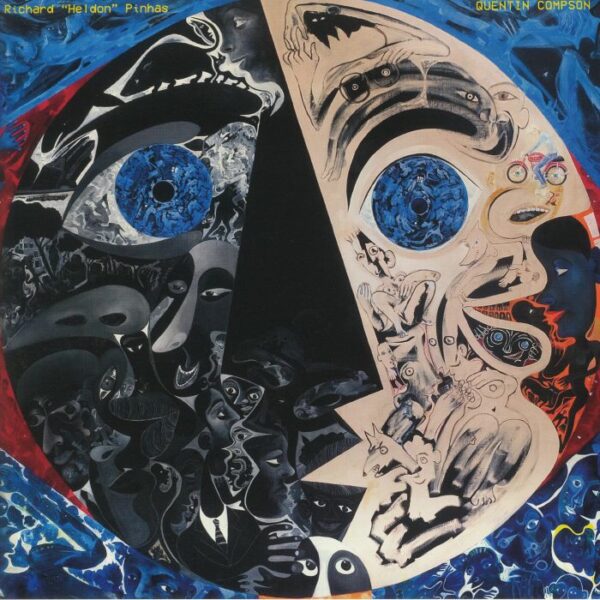 Fabulous vinyl album of experimental rock guitar drone from Richard Pinhas on the album Quentin Compson (BAM BALAM RECORDS BBRP077), notable also as a collaboration with Stephen O’Malley, who did the mix and co-production for about two-thirds of the album…

Pinhas is credited as Richard “Heldon” Pinhas on the cover, as if we all needed a reminder of this most famed of French avant-prog groups who produced those deathless albums in the 1970s – from Electronique Guerilla to Stand By, seven essential slabs to own – all of them featuring Pinhas’ very determined approach to producing sci-fi dystopian angrified rock music with a Ballardian sub-text and plenty of Robert Fripp influence in his futuristic guitar noise (not to mention the way he could make a VCS3 turn somersaults in a frying pan). Well, we enjoyed the Heldon “reunion” record from 2001, the ungainly noisy sprawl of Only Chaos is Real, and followed a few of the Pinhas solo albums and collaborations over the last 20 years or so, many of them released on Cuneiform. The solo Metatron was a goodie, though I was less energised by the numerous Merzbow collaborations which seemed a bit flabby…and I see we’ve missed a good few records since then, including many team-ups with the Japanese avant drummer Tatsuya Yoshida.

It’s today’s record of loud, layered, long-form drones of controlled noise and rich harmonic tastiness that restore one’s faith in the power of “The Pin” to deliver the baked goods where the hungry troops are waiting, and it’s inspiring how much weight and energy he can summon from the dark alien-invaded skies overhead, as if drawing electricity direct from the Saturn mothership (I have previously compared him to BD artist Moebius). Where hero Fripp has become more precise and refined over the years in firing out his steel darts of tungsten alloy, here Pinhas exhibits a commendable abstract messiness, a spontaneity in the outpourings of creative invention that enable him to find melody and harmony in among the oceans of feedback and distortion. This is down to his superlative playing skills, no doubt, and his knowledge of the instrument, but we’ll also give credit to the man O’Malley for his considerable studio craft in knowing how to mix and arrange the layers to maximum effect, something he’s been doing for many years with the Sunn O))) project, and the first two cuts ‘Quentin Compson 1’ and ‘Quentin Compson 2’ deserve to be reckoned as co-authored collaborations. For ‘Quentin Compson 3’ we have a Pinhas mix instead, plus the analog synth of Eric Beriot alongside the massed guitars. This one is a more approachable celestial voyage compared with the molten rock of the first two cuts, and has far more air and space, but it provides a welcome balance to the whole of the LP.

For those who like unreconstructed rock noise, we can’t recommend this highly enough. Plus there’s the lovely cover painting by Alain Rothstein, the Italian-Romanian genius who lives in Paris, turning in a warpoid composite face reeking with Picasso influences and worthy to have been used as a cover by Gong or Steve Hillage. Great! (02/10/2020)