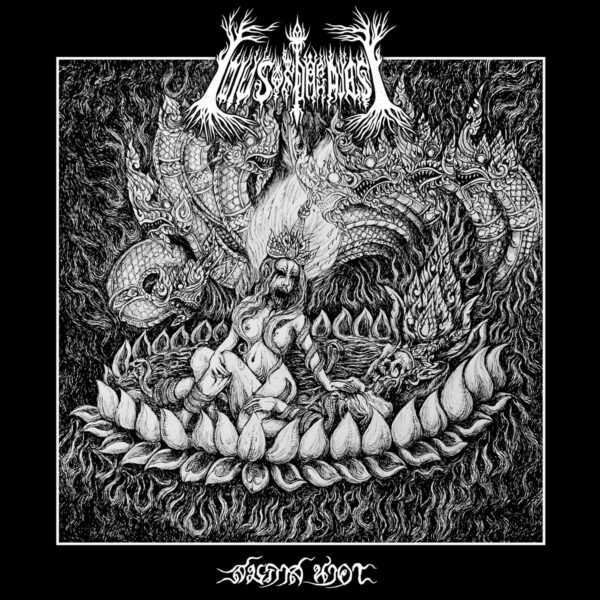 Here comes very melodic black metal folk music with distinctly Asian / Thai musical structures and sounds which give it a highly mesmerising and unforgettable style. The lead guitar has an urgently throbbing quality with a shrill tone that reverberates through your head – you might even find that long, long after the album ends that those lead guitar melodies are still wobbling through your brain cells! Lotus of Darkness is a Bangkok-based trio whose members Thinnarat (drums, mixing), Issara (guitars) and Suriykat (vocals, guitars) are also involved in other black and death metal bands in the Thai capital, which might explain Lotus of Darkness’s sporadic output since forming in 2011: after several years of small releases, the band put out its debut album “The Naga Disguised as a Human” in 2017 and released second album “Sompas-Naga” in April, 2021.

The band’s style features thin grinding tremolo rhythm guitars, blast-beat rhythms and that hypnotic pointillist pulsating lead guitar in songs boasting exotic melodies, all emphasised by a clean production. Suriykat’s craggy spider vocals always sound petulant and angry but they don’t distract your attention or detract from the music. Track titles like “Spirits of the Forest” and “Ritual for the Ancint Soul” [sic] suggest inspiration from Thai myths and legends among other things. These two songs establish Lotus of Darkness’s core style and mood on the album which are consistent throughout save for the acoustic “To the River of Wishes” which comes over as a melancholy country blues song and is a major highlight of the album in its sorrowful beauty.

The album sounds more like a collection of songs, all of which could be potential singles due to those twangy Thai melodies, than a set with a narrative or chronicle to tell. The songs that seem most memorable are the last couple “Serpent’s Flames Rage” for its soulful and often dramatic melodies and “Funeral Storm”, a more straightforward melodic black metal song compared to the rest of the album but still with its strummy banjo-like tunes and an emphatic conclusion.

The music could probably benefit in parts from a sharper, rawer edge to the rhythm guitars and more powerful percussion, and the emotion across the album tends to be even with few climactic peaks or troughs. Some tracks could also have been edited for length: apart from the acoustic track, all songs are at least nine minutes long. I’d have liked to hear a few more short acoustic pieces as interludes between the long tracks. Still, this album is a very creditable effort in combining Thai folk music structures, black metal and what sounds a bit like blues or dark country-and-western music into a fusion style with the potential for expressing strong emotion.