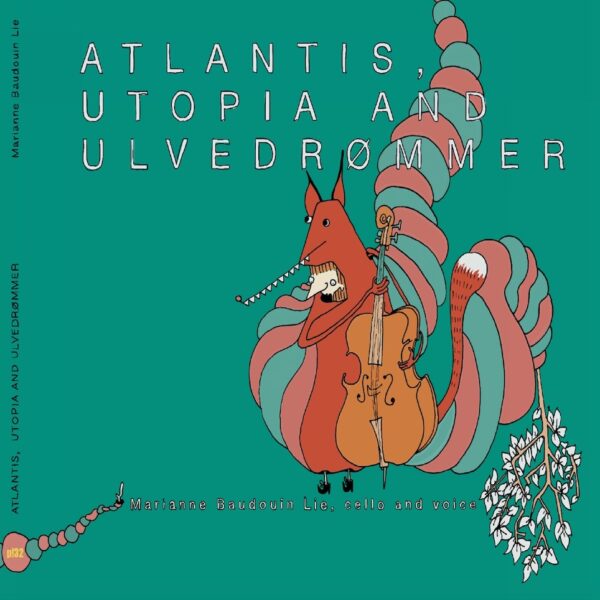 From Trondheim in Norway, we have a solo set performed by cellist and vocalist Marianne Baudouin Lie, courtesy of the Trondheim organisation Particular Recordings Collective. This group acts as a hive for local musical activity in that area and manifests a broad-minded cultural agenda, with available releases in the genres of classical, jazz, free improvisation, and contemporary.

On Atlantis, Utopia and Ulvedrømmer (P32CD), Marianne Baudouin Lie has been afforded the luxury of a two-disc set to stretch out and express herself, with the addition of a booklet of notes and drawings. For the most part, the music is all composed by other composers, incidentally most of them women and I think all based in Norway; we have the Dutch-American Ellen Lindquist (also represented on BIS in Sweden), Eirik Hegdal the saxophonist / composer, Stine Sørlie of Trondheim, and Maja S.K. Ratkje, one of Norway’s finest exports (see for instance the performing groups Spunk and Fe-Mail, besides her own very bold compositions). Baudouin Lie’s aim with the album is to work towards a complete integration of voice and cello, blending her own singing / speaking voice with the warm music. The interaction is key. Other composers have noted that the cello is one of the instruments closest in spirit to the human voice, and Lie builds on this. The plan is not to make a “beautiful song”, but to produce a variety of vocal sounds – singing, speaking, whistling – to create what she calls an “unexpected closeness”.

This all works very well, with the entire set representing a user-friendly and accessible collection of very human tones. Listeners who fear the fierce dissonances of modernism need have no worries, and will find much rewarding music here. The player’s need to stretch out and express herself (see above) is evident in the music too, where she takes the time to explore all the corners of each composition; much of the time it feels closer to improvised music than formal composition, as she finds and exploits moments of opportunity to insert her own personality. I like all four suites on disc one. ‘Many Thousands Gone’ by Lindquist, melancholic, astringent, plenty of expressive techniques in both the playing and vocal performances. The four parts of ‘Concertino per violincello et voice’ by Hegdal, probably the most approachable in terms of its harmonic sweetness and gorgeous melodies. ‘Atlantis Lamento’ by Sørlie, a personal favourite; the recit of the voice turns this nine-minute set into a mini-symphony, replete with a story and actors carrying on a dialogue, while the player also executes her most daring and acrobatic swoops and intervals.

‘To F’ by Ratkje may just scoop the prize for the “darkest” piece on the album, with its serious and heavily enigmatic mood; if this is supposed to be dedicated to another person, it paints a picture of a fragile and brooding relationship indeed. I was less enthused about Ulvedrømmer, which occupies all of disc two; called “a one woman musical”, it translates as “wolfdreams” and was scored by Lene Grenager, fellow cellist, while Baudouin Lie wrote the text. Not so keen on the occasional use of beats and loops here, which have the unfortunate effect of making the music seem less interesting than it really is; the mechanical loops seem to hem in her playing somewhat. Even so, the vocal recit – now spoken, now sung, now howled – is plaintive and heartfelt, and the idea of realising and performing an entire piece of music theatre, and doing it solo, is a very bold coup. Indeed the entire release is a triumph for the imaginative reach and musical process of Marianne Baudouin Lie. Only the rather cutesy cover art, by Mira Dyrnes, feels out of step here; it misses the darker undercurrents, and the bite, of the music. Arrived 2nd October 2020.