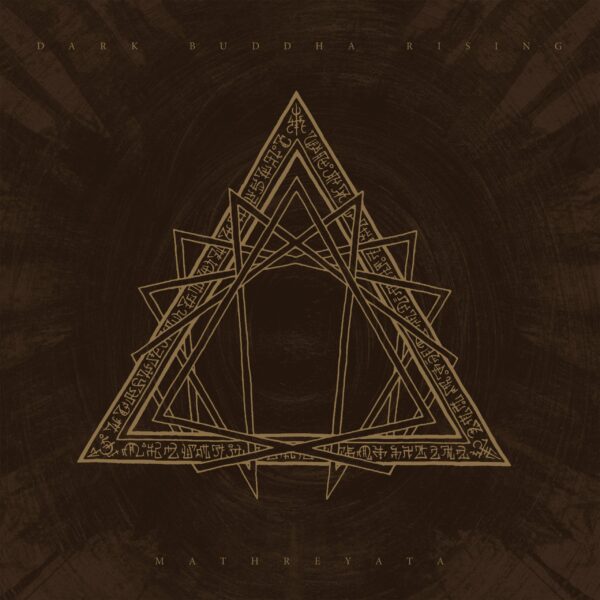 After several busy years from 2007 to 2015 during which they released five studio albums and one live album, Dark Buddha Rising took a lengthy break which itself was busy: the band formed  collaborative project Waste of Space Orchestra with kindred psychedelic spirits Oranssi Pazuzu which released an album in 2019 and is still ongoing as far as I’m aware. As a result, DBR’s seventh album “Mathreyata” took some years to finish and finally saw release in late 2020, so some differences between this album and earlier work from DBR might be expected. One difference is that “Mathreyata” marks Marko Neumann’s debut as lead vocalist, having joined the band in 2015; another is that guitarist / vocalist V Vatanen is no longer with DBR, having left in 2017, though he remains close to the band members.

Apart from the change in vocalists, the music is still dark and disturbing sludge doom metal though at times it reminds me a little of Khanate (due to Neumann’s style which includes episodes of screaming, comparable to Alan Dubin’s high-pitched shrieks) with an emphasis on slow crushing and crumbly doom riffs. Opening track “Sunyaga” is at once slow, almost glacial music with an emphasis on droning guitar tones (and the oppressive mood these help to generate) and a surprisingly busy song in adding dread with space-ambient effects. Later in the track, thundering drum-rolls join the drone guitar riff repetition in escalating the fear and a sense of encroaching evil. Second track “Nagathma” takes more time in building up oppressive atmosphere gradually with repetitive riffing and rhythms and more frustrated screaming vocals to a searing climax but adds little new to what “Sunyaga” gave before. “Uni” marks a change in DBR’s approach: it starts out as a more moody atmospheric piece before a muscular drum rhythm loop takes over and leads an escalation in both sound, layering of instruments and textural background, with spaced-out atmospheric psychedelia, all culminating in a sonic tornado whirlwind sweeping everything into it.

Final track “Mahathgata III” is a sprawling behemoth of unbelievably heavy doom guitar grind, crashing percussion, the most inhuman cries and screams, and strange and uneasy ambient-based landscapes, all taking us listeners to sinister and malevolent territories we never knew could exist within our heads and forcing us to confront the evil lurking within. The music rises and falls, with each rise going a little higher, and the fall less than the previous fall, along a bleak path leading inevitably to a terrifying and punishing conclusion …

Frightening and confrontational as it is, and pushing the notion of meditative music as malicious and hateful in its own right as far as it can go, “Mathreyata” does rely very much on near-endless repetition, almost to the exclusion of anything else, to structure the music and to create and sustain atmosphere, mood and emotional and musical intensity. While the repetition works well at first in opener “Sunyaga”, it becomes less interesting and more irritating on following tracks. DBR might have done better to work on building up atmosphere or developing their sound and music into a richer and more corrupting beast. In this respect the clean production, while it gives a clear sound and allows Neumann’s full-throttled screaming to be heard, might be a problem: it exposes too much of the music’s bones, so to speak, when perhaps the music should be giving the impression of seeming much bigger than it really is.

The recording really needs to be much more immersive, with perhaps more strange and uneasy atmospheres, and more varied music being called for. DBR seem to have arrived at a crossroads in their career where doing things by repetition, though this has carried the band very far, is not going to be enough for the band to continue into the future.