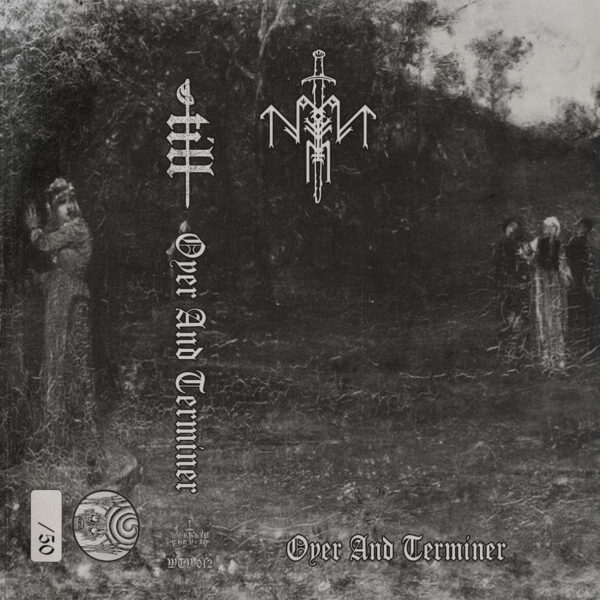 Originally self-released in April 2021, this album from Oklahoma BM duo Till has now been picked up by three labels in the UK and the US for release on cassette and CD. The album’s title “Oyer and Terminer” refers to the court of Oyer and Terminer convened by colonial Massachusetts governor William Phips (1651 – 1695) in 1692 for the Salem witch trials, and the album itself takes the point of view of one of the accused to condemn religious and social hypocrisy and government oppression. The album’s choice of subject is part of a project by Till vocalist / multi-instrumentalist Roanoke and guitarist Croatoan to investigate colonial American history and folklore that relate to witchcraft and the issues and topics that might emerge from that investigation – topics such as conformism, oppression and persecution of outsiders and minorities – that are still relevant to modern societies.

Bookended by two short keyboard instrumentals, themselves worth the price of this cassette for their unearthly sound and atmosphere, taking listeners to a past world, the songs trace a journey by which an unnamed protagonist turns to Satanism and witchcraft, and is later put on trial, found guilty and faces execution. Most songs are fairly short and rely on one main riff repeating over and over in a raw melodic BM style. The powerful music features bristly noise guitars, background synthesiser and thumping percussion, and the only aspect of it that might be considered thin and underpowered is Roanoke’s raspy singing which is so thin that it sounds like drone spray. Even background multi-voiced choruses on tracks like “The Power of Truth Denied” are much clearer and stronger. Not to worry – the music, especially the keyboards and drums, carry considerable emotional drama that compensates for weak lead vocals.

As the album progresses, the guitars start coming into their own on “From my cell I curse the Commonwealth” and from here the strings, keyboards and choirs compete for listener attention in music that is highly focused and emphasises the oppression, punishment and torture our anti-hero is subjected to. Sadness and melancholy are present in solo piano and other keyboard melodies. After the title track, a mix of noisy guitar fury and plaintive keyboards, the remaining songs are straightforward melodic BM songs packing in dread and desolation with a punky if desperate backs-to-the-wall attitude, pained riffs and thunderous percussion. Anger and torment are present in the screaming vocals. For all the songs’ emotional turmoil and intensity though, the closing track “The Devil’s Greatest Trick” turns out to be the album’s highlight: a beguiling and completely left-of-field ambient soundscape with a carnivalesque atmosphere of looping crazed bells, organ and shimmering drone tones, all threatening to go off-key and berserk.

The songs show tight musicianship and are precise and succinct in their messages; even the instrumentals stop the moment they achieve maximum impact and nothing lingers. Though most songs seem neo-primitive at first, repeated hearings reveal much more sophistication in the way the riff-based guitar music incorporates keyboard melodies and effects for emotional impact. The songs end up as solidly compact yet emotionally complex packets of aggression, energy, sadness and despair. I still wish they could be just a bit longer!