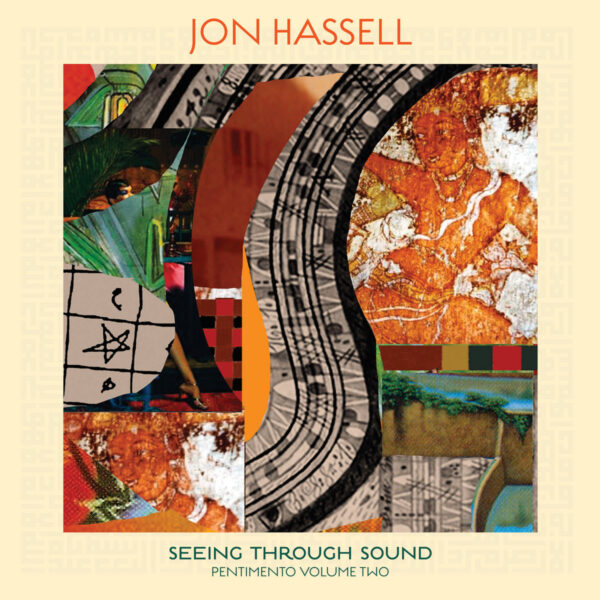 I just found news online of Jon Hassell’s death at the age of 84 years on 26 June 2021 and so this review of his most recent solo album comes as a farewell to the singular path he forged as a trumpeter and experimentalist. I admit I don’t know his oeuvre very well and have come across his work in the form of contributions he made to other people’s albums like Techno Animal’s classic dark ambient work “Re-Entry” (released in 1995) where he co-wrote and performed on “Flight of the Hermaphrodite” and “Needle Park”. As with so many other musicians I had put Hassell down on my Bucket List of artists to check out one day and tick the boxes next to their names; well, with Hassell the time to hear him out has finally come and I can’t ignore him any more.

“Seeing Through Sound (Pentimento Volume Two)” certainly repays repeated hearings: it has a gorgeous sound, in many ways contradictory at times depending on your mood and the circumstances in which you play the recording. Sometimes the music, the sounds and atmospheres can seem very close and intimate, and at other times a haunting alien quality may appear. The trumpet sound that heralds the arrival of “Moons of Titan” is well familiar to me, having heard it so many times when I played that aforementioned Techno Animal double set half to death: it seems so far off, wistful and dreamy, yet in its own way very reassuring in its familiarity. That may be the intention here: the word “pentimento” refers to a reappearance in a painting of an original drawn or painted element which was eventually painted over by the artist” and so the album under review can be considered an exploration of how familiar musical and other sonic elements and structures can be revisited after a long time has passed and recombined to produce heady new forms that expand the consciousness and open up new musical territories.

While the album consists of eight tracks – the first and last tracks being the longest, each of these weighing in at over eight minutes in length – the whole recording should be approached as one continuous work with the gaps between tracks treated as part of the whole sonic experience. In most tracks between “Fearless” (the first track) and “Timeless” (the last), there is a neo-noir atmosphere behind the layers of rhythm and texture that suggests the music is floating and travelling through a vast though not unfriendly space. Despite track titles like “Moons of Titan”, “Lunar” and “Reykjavik” which might evoke icy visions of barren and remote landscapes, the music can at times be warm, even soothing, in the midst of apparent bleakness and a foreboding mood.

Naturally “Fearless” and “Timeless” are the most expansive tracks in their atmospheres, moods and sonic explorations. A sense of awe and the presence of vast unexplored spaces pervade “Fearless” though the repeating clickety rhythm loop throughout the track is a reassuring reference point. “Timeless” – how meaningful that title seems now! – is a richly luxuriant atmospheric piece promising more sonic abundance from whence it came. Distorted soft trumpet wash and skittish piano melody bring a mix of melancholy and mania into an already heady and exotic world of futurist possibilities.

Even if the Pentimento series has been cut short, this second instalment is undoubtedly a beautiful and elegant work of painterly sonic exploration and a fitting conclusion to an illustrious career.