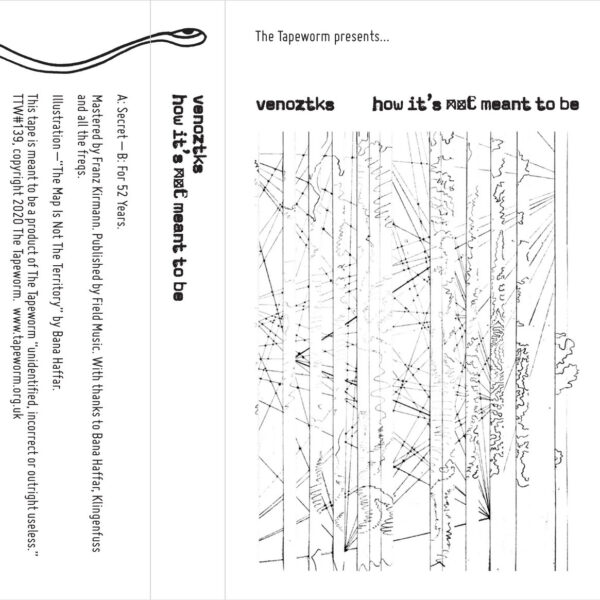 Venoz TKS might be an alias for the lovely Mike Harding, known to the world as one of the managers of the fine experimental labels Touch and Ash International, home to many great records situated roughly in the area of field recordings, minimal ambient, and just plain puzzling moments in sound. Very occasionally Harding surfaces with recordings or sound-art pieces of his own, under aliases such as Souls On Board, Serrata, or Pontifex Maximus, or even as a representative of The Kingdoms of Elgaland-Vargaland, that absurdist Swedish project attempting to undermine our shared common sense on a global scale. But Harding always manages it in a very discreet and low-profile manner, as if unwilling to add to the weight of the world with more experimental output.

Here today as venoztks, he turns in a full-length tape called How It’s Not Meant To Be (THE TAPEWORM TTW#139), the first solo record he’s released after a string of sproradic appearances on odd compilations starting in 1998 (including the 2002 comp X + Y = XY, when he teamed up with Pimmon for precisely two minutes). I am grateful for the chance to hear the venoztks mode unfold at some length, on a cassette which serves up nearly one hour of enigmatic, low-key and puzzling minimal sounds, and in a very unobtrusive manner which might be the artistic “signature” of this unassuming fellow. None of the aggressive repeated pulsations of Ryoji Ikeda (whom he has released) to be found here, nor the self-aggrandising haughty silences of Francisco López. Instead, venoztks patiently sketches the vague outline of something ethereal and unknowable, a presence as nebulous as a gas or perfume…as if he were trying to build a map, a guide to the metaphysical high-spots in the neighbourhood. This is something I noticed on some of the Touch releases from around 15-20 years ago, when I had this odd impression of someone holding up a transparent grid, superimposing the design of an outline on the world for a moment or two, allowing us to glimpse possible hidden connections, but doing so in a remarkably non-insistent manner.

This impression is reinforced on today’s spin of these refreshingly simple and accessible sounds, strung together in barely-there patterns and exuding not-unpleasant moods and atmospheres from their sub-atomic particles. We might also glean some clues from the two titles here, the A side ‘Secret’ and the B side ‘For 52 Years’, both hinting at the hidden dimensions which Harding has made it his mission to investigate, and report back on – even if the reports are not quite what his superiors were expecting. Even the title How It’s Not Meant To Be contains a clue hidden in plain sight, two letters of the word “not” struck-over with the letter X by the typewriter of a conscientious civil servant, or a member of MI5 sending a secret message to our agent in Istanbul. Meanwhile, there’s also the artwork of Bana Haffar (who made the very good Genera record for this label in 2019), called “The Map Is Not The Territory” and serving a visual of contours and grid lines neatly sliced into segments and rearranged into new, puzzling outlines. From 23rd December 2020.