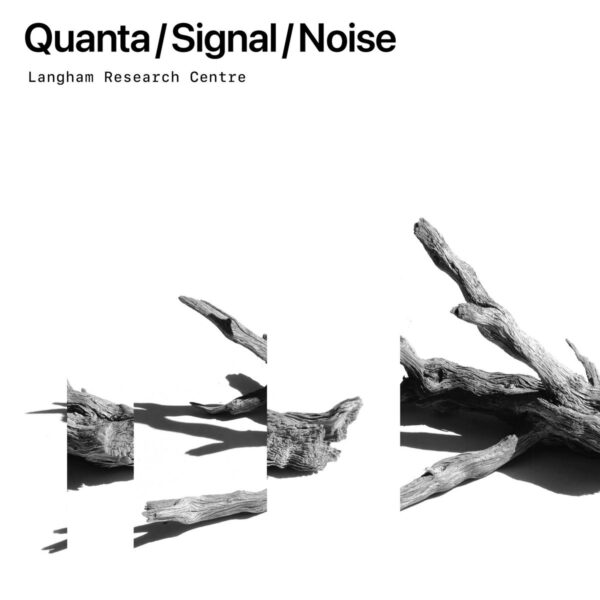 More fine English tape and electronic music from Langham Research Centre. We heard from the group (Felix Carey, Iain Chambers, Philip Tagney and Robert Worby) with their excellent 2018 release Tape Works Vol. 1, but we’ve also been receiving missive from their individual voices in the form of a few superb LPs on the Persistence Of Sound label, run by Iain Chambers. Today the LRC boys attempt something quite different, with Quanta / Signal / Noise (NO LABEL), a work that strives to be very collaborative and even interactive – about which more shortly.

If you buy the cassette, you get just four short pieces, all trimmed to last precisely 4 mins and 33 seconds, and they are presented as four “versions”, each one subtly different and emphasising different aspects of the plan. At one level, it’s very simple – the four composers express “a fascination with sound itself”, aiming to generate “shapes, energies and dynamics” in a purely abstract manner. They see this as a very deliberate step to move away from the conventions of music composition, and as such they participate in the great 20th century story of avant-garde composition that has been wrestling for decades with the problems of form, content, and harmony. Where Langham Research Centre might part company with the extremists of that movement, such as Boulez or Webern, is that they are still attached to meaning in their work. Indeed, the four concise descriptions I have in front of me indicate that the four parts of Quanta / Signal / Noise contain substantial quantities of ideas and associations, associations which the composers do not deny – in fact they actively encourage them, with these very interpretative and user-friendly descriptions. In particular, we are invited to hear the voices of birds, animals, and insects in these gently teeming abstractions, plus location recordings, fragments of melody, a cityscape, the air, underwater. Further, the Langham Lads aren’t averse to a spot of narrative – each piece can be “heard” as a radiophonic story by the listener, and the programme notes collude in this, by framing it in such a way that the story of the assemblage and sound collage is as much a compelling narrative as the implied story that leaks out from these half-familiar echoes and moments, these “lost melodies” which fleetingly dash past in the imaginary space. 1

It remains to mention the “interactive” dimension. This takes the form of an app for your iPhone, which the LRC have developed with technicians at the London College of Music in the University of West London. While I’m personally no great lover of apps on the phone, I gather there are two main modes of engagement with this one: (a) you can create your own “imaginary auditory landscapes” from the material, presumably with the added advantage of carrying it anywhere you go with your phone, thus creating the “soundtrack for your day” experience which is the dream of the 21st-century millennial. A form of personalisation, to put it another way. (b) the app is generative software, which means it applies an algorithm to the original sound files, enabling the phone owner to create their own versions of the pieces. I think there are already apps which do this, like Wotja, and I’d be very surprised if Brian Eno hasn’t come up with a portable version of the ideas he’s been tinkering with since 1995, but this one appears to be specific to the Quanta / Signal / Noise project. As such, it indicates the open-ended nature of the work of Langham Research Centre, and their willingness to invite audience participation in a meaningful manner.

All of the above is neatly expressed in the cover collage, cutting-up a photo of a dead tree and arranging it into new shapes. Very fine. Cassette version is limited to 20 copies. From 16th December 2020.