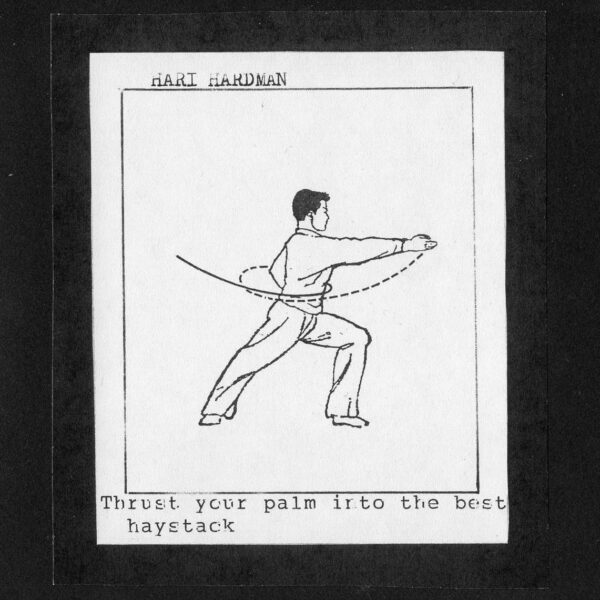 It seems a while since we received any Hari Hardman Produkt, and in fact the last one to cross the desk appears to have been 5 years ago. Today however we have Thrust Your Palm into the Best Haystack (HH0029), which is shaping up to be both one of his more perplexing releases, yet also surprisingly accessible…this UK oddity only puts out CDRs in very small print runs, with hand-made packages which doggedly persist in the use of the typewriter, photocopying and collage for their imagery and inserts, plus he adheres to same schema of using a similar found graphic for the front cover every time – maybe something clipped from a manual of karate exercises, or similar.

Every time you open one of these old-school packages, you’re guaranteed a strange experience as you scan these absurd and inexplicable images which seem to have been beamed in from an alternative version of the UK, and whose weirdness is enhanced by the distortions of photocopying and Hari Hardman’s interventions. Indeed I often wonder if he should collaborate with the Scarfolk genius Richard Littler some time – they seem to share a similar warped view of English society. As to the aural contents of this particular head-scratcher, we have a programme that shifts violently between two main modes – extremely harsh electronic noise, in thankfully rather short bursts, and very strange episodes which might be collaged from field recordings or found tapes. In the latter camp sits the track ‘Neanderthal No. 9’, which in 6:23 mins depicts a baffling scenario which might be the world’s least successful moving man struggling which a household appliance. It’s both completely absurd and very funny, and also happens to be compelling listening, for reasons I can’t fathom. As to the noisier outbursts, arguably there’s nothing here that’s an advance aesthetically on any given bedroom noise-cassette kid labouring away to an audience of nine listeners at any time in the 1990s, but I do like the verve and elan with which our man throws himself into the task. He evidently finds it good fun, and that good humour passes on to us too.

It’s on the last track ‘Circle’ that Hardman excels himself and even beats his own track record, a longish (8:28) composition that juxtaposes Apollo moon mission recordings with a vaguely disquieting keyboard drone. Simple, perhaps even rather obvious, yet it’s one of the most subtle and ingenious ideas we’ve heard from this oddfellow. This might be why I characterise this as a “surprisingly accessible” record; even his track titles, which more often than not used to be sheer gibberish strings of random numbers and letters, are now legible and meaningful. From 23rd December 2020.