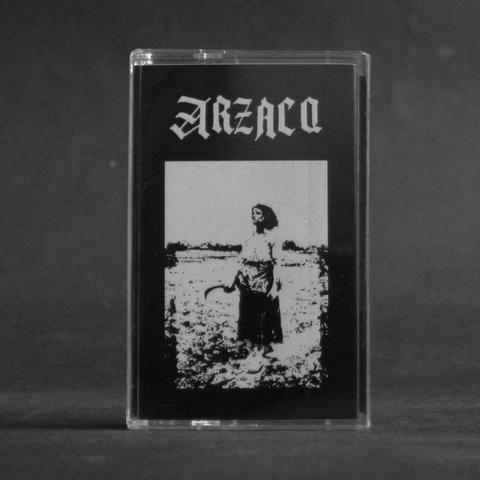 Based in France’s historic southwest Gascony province, the history and legends of which are major inspirations for this raw melodic BM project, Arzacq already has two cassette releases on the Tour De Garde label run by O.T. of Canadian BM act Akitsa. “La Nueit Escura” is the second of these releases, coming out in July 2021 almost a year after Arzacq’s debut tape. On first hearing the tape appears very lo-fi, raw and primitive but promising in the way of good melodies and riffs, and some occasionally good song-writing, and each repeated hearing brings out more of the music which increasingly sounds commercially pop-oriented. The guitars are clear enough while the vocals are gravelly (and give the impression that their owner is suffering from a heavy head cold) and the drumming is more felt than heard. Song titles appear to be in the Occitan language of southern France.

We get off to a good start in the punky rock’n’roll opener “Ou tombe le soleil” which features a riff from the famous Kiss song “I Was Made For Lovin’ You” and some other melodic influence from the Blondie song “Call Me”. The ranting and raving are not too impressive and perhaps the less said about the vocals, the better, as the rough quality of the sound across the album blunts the singing and reduces it to raspy squawk. The glory of Arzacq’s style is the lofty herald-like nature of the guitar sound in parts and the music’s rock’n’roll headbanging tendencies and 1980s punk / post-punk sensibilities which come out more in the middle of the album when synthesisers are added to one song, turning it almost into a mid-1980s Gothic darkwave piece were it not for the woefully crabby singing. From this moment on, Arzacq tread in a more rock-pop but still raw music direction with bouncy, almost clap-along tunes and the vocals following note for note. Later songs have more atmosphere and rely even more on a mix of synths, ambient effects and strong droning guitars that alternate between strummy tremolo melodies and bristling noise.

The song-writing is good with Arzacq showing flair for raw rock’n’roll tunes and driving rhythms that could have come roaring straight out of Akitsa’s own albums (no wonder Tour De Garde picked up Arzacq’s recordings) and if “La Nueit Escura” had a better, clearer sound, those melodies and rhythms would really jump out at listeners. At the same time, Arzacq seems to be experimenting with its style and sound from one song to the next, with the result that the album sounds inconsistent and gives an impression of trying to find its path and sticking to it. The one constant is the gruff vocals which start to sound cartoonish after the first few tracks.

While some songs are interesting for their synth work, ambient effects and the combination of devastating noise with clear bluesy guitar soloing, the album as a whole could definitely do with a clearer sound and better vocals.