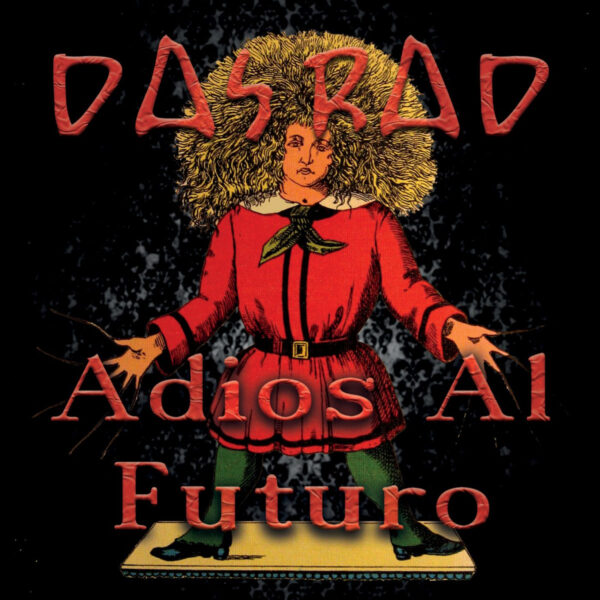 Looking like he’s just french-kissed the third rail, our cover star “Shock-Headed Peter” bids you a frazzled welcome to Das Rad‘s second outing. He was the subject of an eventual million-selling (and much translated) book of cautionary tales for children, which was penned by Heinrich Hoffman. And the unpleasantness within its pages is easily the equal of anything experienced in a U.K. “Public Information Film” of the early seventies, barring of course “The Spirit of Dark and Lonely Water”. That’s a given.

Sharing space with an inner panel showing portraits of various political crackpots ‘n’ despots (clue: one of these four lovelies exited earlier this year…), everything (let’s not forget the title!) points towards a ‘going to hell in a handcart’ mindset. But as this trio: comprising the mega-ubiquitous, multi-instrumentalist Martin Archer, along with Nick Robinson (ex Dig vis drill) and Steve Dinsdale (Ork of the Upper Atmos./Radion Massacre Int.), are a purely instrumental project, any displays of dissatisfaction with the way the world’s cogs are grinding can only be conveyed through the accompanying artwork and the emotions generated by the trio’s mastery over standard g/b/d, winds and electronics. Not such an easy undertaking, but like-minded concerns such as Last Exit, the U.K.’s Red Square and Massacre (another Laswellian outfit), weren’t exactly that backward in coming forward, were they?

With “Adios…” however, on first airing, it comes on less clenched fist and more towards a ‘something’s gotta give’ feel. The peaceful opening passages of “Inside Reverse” very soon crumble and give way to discordant horn lines, mad guitar and suspenseful upper register reverberations that are very reminiscent of late period Henry Cow. “Deuce of Gears” (not on a pack of playing cards I’ve ever shuffled – is it from an industrially-inclined tarot set?), is more percussive/tentative with again, Nick’s guitar growling malevolently in the background. Multi-tracked saxes on the title track (accidentally?) edge towards Donny McCaslin’s work on Bowie’s swansong, while “Rothko Strobe/Another Place” is a nightmarish melange of blurred/indistinct images which are just the right soundtrack for when our unthinking secret agent hero knocks back the drugged cocktail…