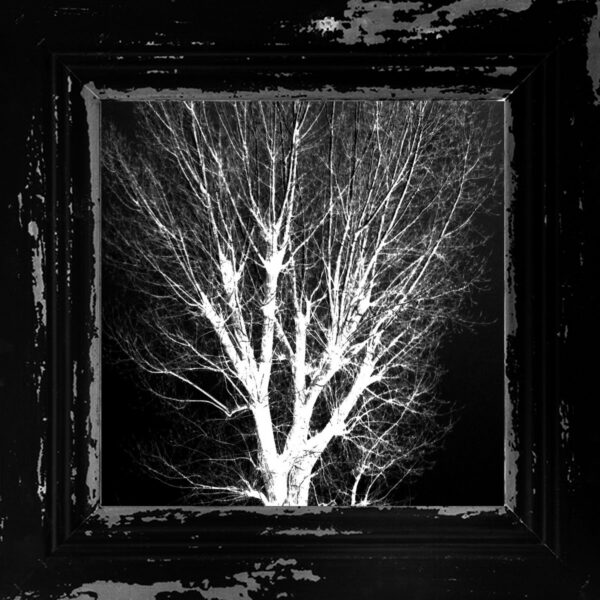 French black metal act Arbre – in English, “Tree” – has been steadily releasing studio work since forming in 2012, numbering its albums with Roman numerals rather than giving them titles. So as you can guess, “V” is Arbre’s fifth album. Incidentally I’m not sure if Arbre is a solo project or a group project though the album sounds as if it is one musician’s work. Three tracks, numbered XIX to XXI, feature on “V” and very long, mostly instrumental pieces of flowing raw black metal (almost verging on melodic rock’n’roll, even rock-pop) they are too with an emphasis on a bleak wintry ambience and melancholy solitude.

In their minimal use of instruments (guitars, bass, percussion, synthesisers), a pace ranging from leisurely to super-fast, and reliance on repetitive structures with distinctive riffs, the long tracks are almost reminiscent of Burzum’s music around his famous “Filosofem” (1996) period in parts. They have a habit of dropping into very quiet atmospheric passages where a solitary acoustic guitar strums a melody loop against a background of nature-themed sound ambience and then back into droning tremolo guitar textures. While there are vocals forming words, they are usually far back enough in the mix to be another layer in the sonic mix.

The music can be pleasant to listen to, with the long passages of rolling tremolo guitar melodies and the powerful orchestral synth music, though I don’t find it very immersive. The music is too busy and some of the orchestral keyboard music and the percussion are pedestrian and have a stereotyped feel. There does seem to be something a bit forced about how the music builds in power and intensity, especially in the middle of Track XX where there is a lot of repetition, the keyboard orchestra is very brassy and the synth drumming just plods along. The best music with regard to power and variety of melodies and moods features on Track XXI: it has aggression and epic majesty in spades.

Much of the album could be edited for length, resulting in a much more direct and punchy recording that would appeal to audiences not already familiar with Arbre. Newcomers might find the album as it is boring, perhaps too repetitive and not all that original in its use of synthesiser orchestral music. In  land that produces so much original and often eccentric black metal, Arbre stands out for being rather ordinary.