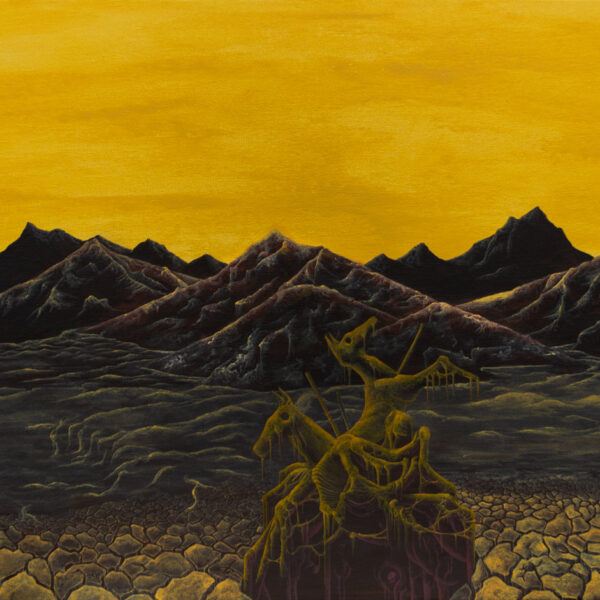 For a raw atmospheric black metal release, the cover art for “Mntu” is very striking – it’s a picture of desolation or struggle, depending on your mood or point of view. “Mntu” is the debut album of Boston-based project Ushangvagush whose sole member, known only as D, not only plays all instruments but writes lyrics in both English and the language of the Mi’qmaq people, indigenous to parts of Canada’s Atlantic seaboard provinces and the US state of Maine, and of whom D is a member. The album’s title means “devil” and the whole recording perhaps reflects the personal struggles and conflicts D has had to deal with throughout his life as a First Nations individual living in and adjusting to Western society and its values, finding his path in creating and playing music, and perhaps reconnecting with his Mi’qmaw heritage and values through that path.

For most of its running time, “Mntu” is an intense and emotional journey full of aggression, pain and sorrow, usually very fast but also featuring slower passages of surging raw guitar melodies and thunderous percussion. Four of the eight songs on the album have Mi’qmaw-language titles (and I assume have lyrics in that language) and of the others, three are only numbered in the order that they come on the album. While Ushangvagush’s sound is harsh, scourging and definitely very lo-fi, the album’s production is actually very good and highlights the changing ambience and mood behind each song. Complex melodies in songs are played up by the production and the music appears almost three-dimensional. Strong emotion in slower parts of the music stands out as well. The only downside is that the harsh ragged vocals can seem a bit flat and far back in the mix, and some songs might have benefited more from a clean-toned style instead.

Early tracks are a flurry of raw grinding BM noise and D’s roaring voice with outbreaks of strummy tremolo guitar melodies, gradually moving in a more melodic post-BM direction in third track “Npuaqan M’st Wen Sama’i’j” and the mood likewise becoming more varied and complicated as anger and aggression start to give way to melancholy and pain. In some of these tracks the melodies can be fuzzy and not always distinct. Starting with “IV”, a new phase begins: the music becomes more atmospheric and introspective, and the emotional intensity is sometimes a lot to bear. Personal struggle and torment come to the fore in middle track “Gjiapigji’j” and even the later song “Amasia’s Letter” has some level of agony and pain in the noise fury. The last couple of tracks on the album are still noisy and aggressive but also show a steady, determined defiance and persistence.

You might need a few repeat hearings to get your head around this album – while it’s not very long, it can be relentless and exhausting – but with each repeat spin, the emotions underlying the savage music become more accessible and you can discern real sorrow at past losses and destruction, yet also yearning and hopes for a better world at peace with itself and with nature. This is a very powerful debut work and despite what he might have had to confront within himself and endure to make it, D should be proud of what he has achieved here.