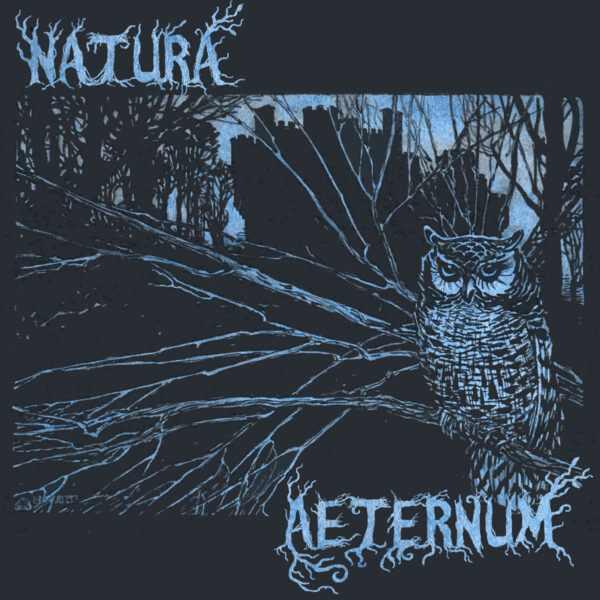 A self-titled fourth album, when previous albums have had other titles, might suggest a new direction or a current path becoming firmer for Colombian-based act Natura Aeternum, having become a duo with vocalist Fernanda Tabares joining original solo member multi-instrumentalist / vocalist Alexis Salazar back in 2020. “Natura Aeternum” is the duo’s second album after “Will-o’-the-Wisp” with just six months between releases so this young band (formed in 2019 by then 18-year-old Salazar) has been very busy refining its brand of nature-themed melodic atmospheric black metal with a strong ambient influence.

Opening track “Buho” (“Owl”), also the longest at 10 minutes, sets the tone for the album with music mixing steely hard-edged BM and Salazar’s own harsh ragged vocals, usually etched with reverb that makes his voice huge and cavernous, with twinkly synthesiser melodies and Tabares’ girlish singing. With a lush wet-forest atmosphere and birdsong in the background, “Buho” is a pleasant enough song but becomes stodgy as it continues. The task falls to “El Viajero del Bosque” (“The Forest Traveller”) to catch and maintain listener attention with more lively melodies and rugged chuggy riffs.

On most songs that follow, the music zigzags between gritty atmospheric BM and a softer, melodic style with orchestral, ambient and pop elements with Salazar being either the sole or dominant vocalist. While the songs are well written, the synth-generated orchestral music and toy-like pop melodies can be cloying and sickly; it would help if Natura Aeternum could bring in guest musicians to play live acoustic orchestral instruments for a more full-bodied sound and real emotional feel. As it is, the bulk of the middle part of the album (tracks 3 to 6) can be entertaining with lively black metal but the songs are flat and lacking in feeling.

Near the album’s end, the pivotal track of the album “Podemos ser Buhos Juntos” (“We can be Owls together”) is a very pretty post-BM pop track with plaintive piano melody, a lead guitar solo full of yearning and Tabares’ own dreamy singing. By the time we reach the closing track “Amanecer” (“Dawn”), the album’s formula of harsh atmospheric BM and dreamy ambient pop is sounding stale and played out. Everything in the song, from the singing to the piano melodies and ambient effects, seems sickly sweet.

I hate to see young musicians like Salazar throw his talent and effort away writing, performing and recording such forgettable, stereotyped work like this album. There are a couple of good songs early on but from then on, the album goes downhill in energy and creativity. Listening to this album was a sad and painful experience for me.