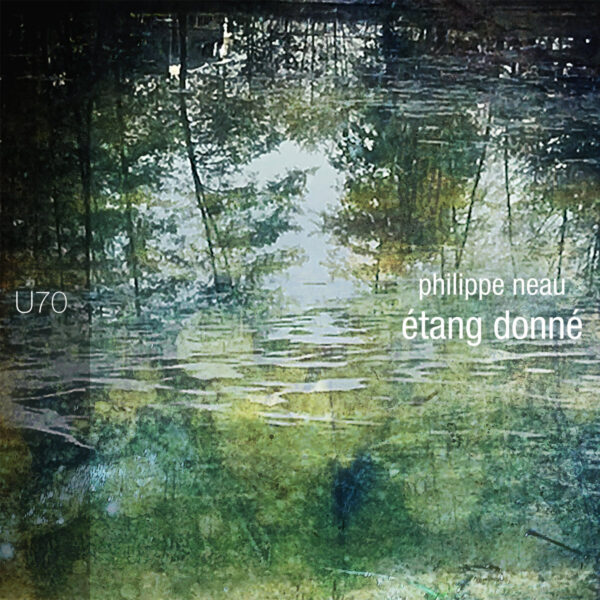 Starting way back in 2008 with his Nobodisoundz project, Philippe Neau has built up a sizeable discography of solo works and collaborations in sound art and musique concrête in different formats across various labels. In recent years he has starting recording under his own name and “étang donné” (“given pond” in English: the title is a pun on the French expression “étant donné” meaning “given that” or “in consideration of” and is an allusion to Marcel Duchamp’s last major work “Étant donnés: 1° la chute d’eau / 2° le gaz d’éclairage” / “Given: 1. The Waterfall, 2. The Illuminating Gas”) is his first album for Daniel Crokaert’s Unfathomless label. The source recordings for “étang donné” were made over 2018 – 2020 near the Saint Jean sur Erve in Mayenne department in north-western France. The department is named after the Mayenne River which flows through the region on its way to join the Loire River and indeed flowing water sounds are present on the album whether as a dominant sound layer or as the ambient canvas on which and against which other sounds or audio activities appear.

The soundscape created on this recording is very rich and deep with a lush feel and a busy quality. Birdsong in the distance suggests the presence of a cool and deep temperate rainforest where precipitation falls frequently but gently in the form of showers or mist. Scratchy metallic noises suggestive of insect scrabbling or digging or Neau’s own sound recordings and setting up his equipment provide an intriguing counterpoint to the continuous water sounds: the human activities are a temporary distraction to the greater narrative of the river as perhaps the background and foundation of all activity in its region but also as a measure of that activity and of time itself. Eventually the river sounds pass and only a whirring noise is left, as if even the river must obey physical or abstract forces greater than itself and pass on.

Listening to this work is very relaxing and hypnotic, and for a brief period I was transported into another magical world far from the cares and worries of lockdown reality. Neau’s photographs and Crokaert’s design treatment of the photos which accompany the CD also suggest mystery and a rich luxuriant green beauty in this work of sound art. Even without the gorgeous artwork, the soundscape alone is evocative and highly immersive.