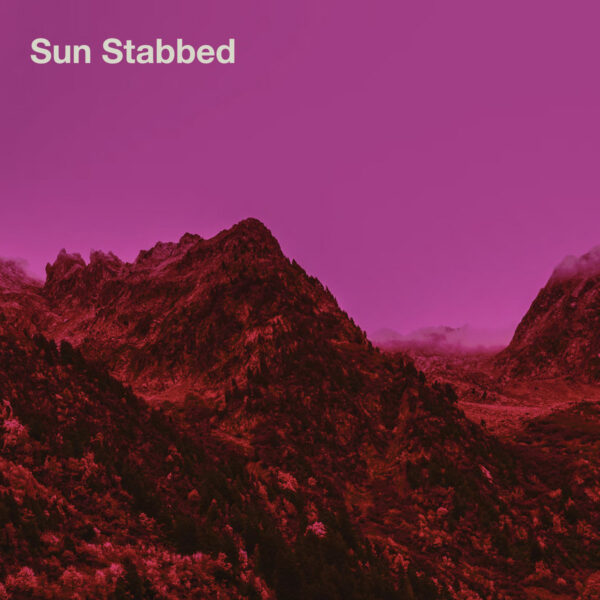 Sun Stabbed are the French guitar duo Pierre Faure and Thierry Monnier, whose brand of diabolical-genius guitar drone we haven’t heard since the 2011 LP Des Lumières, Des Ombres, Des Figures, although the individual members have shown up more recently as part of La Morte Young, whose A Quiet-Earthquake Style caused quite a displacement in the tectonic realms of the heads of many in 2018. Monnier also turned in Temps Espace in 2017, a real head-scratcher of puzzling tape-assembly sounds overlaid with certain quasi-philosophical concerns.

The duo are back today with In Girum Imus Nocte Et Consumimur Igni (DOUBTFUL SOUNDS doubt 20), a very single-minded hummeroo of abrasive guitar drone made simply with amplifiers, effects pedals, and a brace of six-stringed beasts…spread out over three very long and slow-sluggy tracks, one of them occupying an entire side at 19:06. Feedback and amplification are the major components to this near-static music, rather than any semblance of “playing” the guitar, but even so the sound continues to resolve itself into something resembling musical chords, possibly a by-product of the process and the effects of loud volume playing over harmonics and resonant steel strings. The duo are proud of the fact that they’re doing it in “a more precise way than before”, by which I understand that they’re cutting down on the distortion that was an audible part of the 2011 LP, likewise the intrusion of “foreign” elements in the form of found tapes…perhaps they’re inching towards a purer and cleaner form of guitar noise drone with this release, although they also admit to a personal liking for the 1990s New Zealand school (i.e. almost anything played by Michael Morley) and American “guitar noise minimalism”.

If by that latter remark they mean Dylan Carlson’s Earth, one can almost see the connection in the cover art for this release, whose desolate imagery is something at which the American player might tilt a knowing head. It depicts a forested mountainside put through colour filters until it resembles the geography of an over-heated alien planet. If there is a “scorched earth” theme to In Girum, it might be picked up in the LP title, a sentence containing the Latin words for Night and Fire, plus the final track title which speaks of a “civilisation which burns”. This hints at a violence and force that we don’t quite find in the music; the volume and textures thet emit are very full, but there’s not quite enough darkness or aggression in these rather languid drones, where Faure and Monnier’s concern for poise and stasis seems to have sapped half of the power from the music. One enjoys the lengthy sojourns in these parched lands, but we come out the same way we went in, with no real sense of a payoff or enlightenment at the end of it. From 19th January 2021.